“After a series of meetings and phone calls with high-ranking officials this month, a Republican who deals regularly with the Trump administration confided in me about his frustration. “The dysfunction in this White House just knows no bounds,” he said.

Of the many things people worried about before President Trump took office, it turned out that the main problem was his incompetence rather than his authoritarian tendencies — at least so far.”

“Right on the merits. Confident in their methods. Sure of their chances. When Bill Clinton suggested to his wife’s advisers that, considering Brexit, they might be underestimating the strength of the populist tide, the campaign manager, Robby Mook, had a bulletproof answer: The data run counter to your anecdotes.

That detail comes from “Shattered,” Jonathan Allen and Amie Parnes’s compulsively readable account of Clinton’s 2016 train wreck. Mook belonged to a new breed of political technologists with little time for retail campaigning and limitless faith in the power of models and algorithms to minimize uncertainty and all but predict the future.”

The comments section was closed, so I wrote a letter to the NYT:
Brett Stephens wrote in his op-ed Climate of Complete Certainty, “Anyone who has read the 2014 report of the Intergovernmental Panel on Climate Change knows that, while the modest (0.85 degrees Celsius, or about 1.5 degrees Fahrenheit) warming of the Northern Hemisphere since 1880 is indisputable, as is the human influence on that warming, much else that passes as accepted fact is really a matter of probabilities.”

This is unacceptable nonsense. This is the way Bill O’Reilly writes. O”Reilly states one or two facts, and then a conculsion, not supported by the facts he has stated, and then, does not offer any evidence to support the final, damning conclusion. If this statement is true, why is there not a single example offered to support it. A big bad generality is the tool of a smear artist.

Stephens analysis of Clinton’s hubris was excellent, but his twisting argument in the sentence above in neither acceptable, nor professional. Almost all science is based on probabilities. That is not a sin, that is because 100% certainty is expensive to prove, even if the concept is easy to embrace. This unsupported trash talk might have been fine at the WSJ, but it is not the standard here at the NYT.

“In analyzing the attack on net neutrality, one looks in vain for the problem that needs to be fixed. Net neutrality refers to rules intended to ensure that broadband providers cannot block content or provide faster delivery to companies that pay more. The policy was put in place in the George W. Bush administration, where it enjoyed bipartisan support. In the years since, it has sheltered bloggers, nonprofit organizations like Wikipedia, smaller tech companies, TV and music streamers, and entrepreneurs from being throttled by providers like AT&T and Verizon that own the “pipes.” ”

Rule of thumb. If At&t and Comcast are for it, I’m against it. These jerks think customers are fleecing opportunities.

I recommend a video on youtube by John Oliver last year on this subject.

Net neutrality is what encourages technological innovation and competition on the open internet.A s the article states, it means that the speed of internet that you pay for is the speed you get for all websites, all the time. How would anyone be opposed to that? Unfortunately, ISPs (internet service providers) such as your Verizons and your at&ts want to be able to get more money out of you and other online websites & companies by charging for the “fast lane” equivalent of internet connections, slowing down & throttling the connections of those who don’t pony up the money. The problem is that this so called “fast lane” of internet connections runs at literally the same speed as internet connections under the Net Neutrality laws. It’s not paying to run faster, it’s paying so you don’t get slowed down.

The point is, should Net Neutrality laws be abolished, ISPs like Comcast & Time Warner will be able to charge more monthly for internet services. So not only will consumer’s be charged the monthly/yearly fee for their internet, but they may be charged more for using certain online services like YouTube and Twitter. This is the internet equivalent of your electric company charging you extra for using it to power your desk fan. The company doesn’t have the right to charge you for what you use it for, only for the service itself. Furthermore, these ISPs most likely own TV & cable services & can dictate what competes & what doesn’t. Killing net neutrality kills the open internet.

“Many of us Trump critics set our outrage level at 11. The Trump threat was virulent, and therefore the response had to be virulent as well.The side benefit was we got to luxuriate in that rarest of political circumstance: a pure contest between right versus wrong. Everything seemed to be in such stark polarities: pluralism versus bigotry, democracy versus fascism, love trumps hate.

Trump’s totalistic menace allowed us to stand deliciously on the side of pure righteousness.The problem is that Trump has now changed and many of his critics refuse to recognize the change. He’s not gotten brighter or humbler, but he’s gotten smaller and more conventional. Many of his critics still react to him every single day at Outrage Level 11, but the Trump threat is at Level 3 or 4.

“Wikipedia founder Jimmy Wales has stepped to the forefront in the fight against ‘fake news,’ launching a crowdfunded online publication, WikiTribune.Its purpose is to cover a broad range of general issues – politics, science, technology – with each fact-checked by an army of proof readers and ‘beefed up’ when required.”

Good luck. I hope Facebook really takes on this problem in-house. The WikiTribune approach might prove useful, in which case, Facebook will probably copy some of it.

Hello. Welcome to Professor Malcolm Gibson’s Wonderful World of Words — a.k.a. “Making Words Work” — the world of writing, editing, grammar and usage as it is preached and practiced by Malcolm Gibson, a former newspaper editor professing journalism at the William Allen White School of Journalism and Mass Communications at the University of Kansas in Lawrence.

This is his warm-and-fuzzy digital guide to good word use. You have access to a multitude of goodies that can help, inform and, in some cases, entertain. Lurking among the links are even a few surprises, most of them pleasant.

Said: “Said” is the best word of attribution most of the time.  That’s because it has no connotations.  All other words of attribution carry some additional, usually editorial, meaning. They are appropriate only if that additional meaning is proper and accurate. Even “stated” carries some connotational baggage: It implies formality, something read from a prepared script. Try not to use the words “according to” when attributing something to a person. Reserve it for reference a to written reports and stories that have been published in other newspapers or magazines. Use the word “charged” in attribution only in the context of a formal legal action. Avoid words such as “added,” “mentioned” (which implies it was done “in passing” or as an afterthought) and the like. 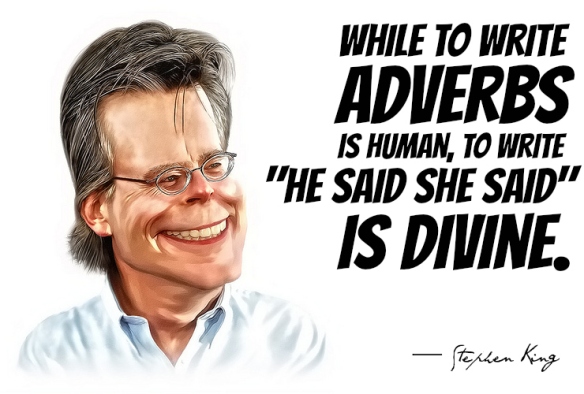 “I think we all agree that dialogue tags are necessary for readers to know who’s talking. But writers are divided in how we use them: Some, including Raymond Carver, simply use “he said,…”

“Well, heck, who said Donald Trump isn’t going to accomplish anything in his first 100 days? All of a sudden there’s a one-page tax plan and a raft of deal-making, while the Senate was bused over to the White House grounds for a briefing on North Korea.

Maybe the president believes that when you can make an entire chamber of Congress ride around like so many tour groups, the world will understand that you’re a can-do kind of guy.”

Gail,
This is a very funny piece, thank you. I can’t get over how the commentators do not reference your piece at all. They are so busy continuing their own personal public blog, that they do not even reference that they are enjoying your readership, and your fount of wit.

One of the better belly laughs: “Everybody knows that Trump wants a can-do record when he hits Day 100 on Saturday. To get there, he appeared to be adopting the garb of Somewhat Normal Republican (SNORE).”

“Conservatives emphasize that the official top corporate tax rate in the U.S. is too high, and they have a point. The top rate for American corporations — almost 39 percent, including a 35 percent federal rate and a bit more for the average state rate — is among the highest in the world, according to the Tax Foundation.Yet that’s deeply misleading, because most companies don’t pay that rate. The Government Accountability Office found that two-thirds of active corporations paid no federal tax. Even large, profitable corporations paid an average federal rate of only 14 percent — and Boeing, Verizon, General Electric and Priceline paid no federal income tax over a five-year period, according to Citizens for Tax Justice.

There’ve been many studies showing that the U.S. effective marginal rate for corporations is in the same ballpark as in other industrialized countries (some say it’s a bit lower, others a bit higher).

So, sure, let’s lower the official corporate tax rate while reducing loopholes, but don’t pretend this will create a ton of new jobs.”