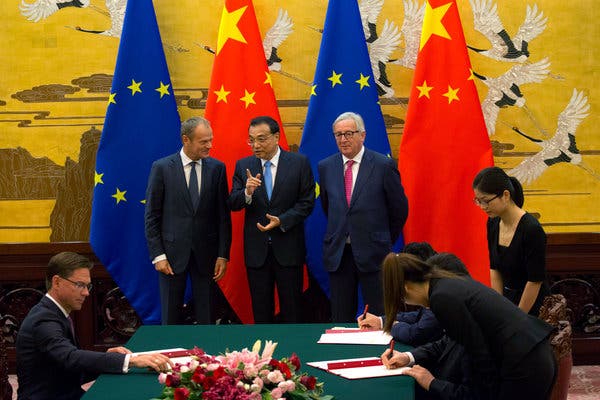 BRUSSELS — From trade to regulation to security, America’s traditional allies are accelerating their efforts to buttress a global system that President Trump has seemed prepared to tear down.

After months of stunned indecision, they have undertaken a flurry of efforts intended to preserve the rules-based order the United States created after World War II and championed ever since.

The most obvious example came on Monday, the same day a stunned world watched Mr. Trump praise President Vladimir V. Putin of Russia as a competitor after having dismissed Europe as an economic “foe.” A few thousand miles away, in Beijing, the leaders of the European Union and China held a long-scheduled meeting of their own.

In the past, expectations for such meetings were low, given the conflicts on trade and human rights between the Europeans and the Chinese. But while those differences remain, this summit meeting produced an unusual joint declaration and a common commitment to keep the global system strong.

The next day, the Europeans traveled to Japan and signed the biggest free-trade agreement in history, just the sort of deal the Trump administration has criticized.

And on Wednesday, Europe’s top regulator announced a $5.1 billion fine against Google, another strong indication that Brussels is not just fighting to maintain the rules-based trading order, but is also positioning itself as the watchdog of that system.

After months of denial, anger, bargaining and depression, Europe and other parts of the world have accepted that Mr. Trump and his mission of disruption are not going away.”