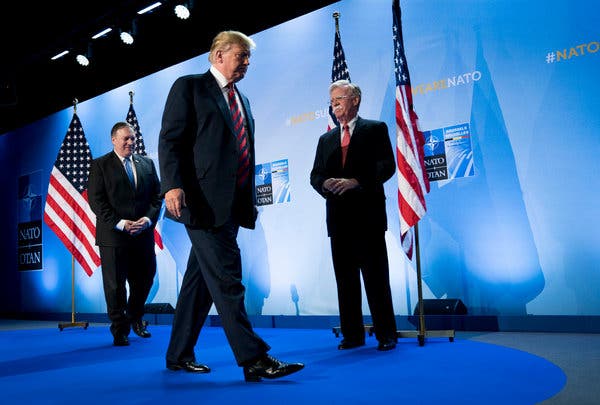 Before the word “resignation” became a euphemism for being fired, it connoted a sense of public integrity and personal honor. Attorney General Elliot Richardson and his deputy, William Ruckelshaus, showed both qualities when they resigned from the Nixon administration during the Saturday Night Massacre in 1973. Jimmy Carter’s secretary of state, Cyrus Vance, did likewise when he resigned during the Iran hostage crisis in 1980.

Assuming Mike Pompeo and John Bolton still have their own senses intact, they too should resign following the epic disgrace of the U.S.-Russia summit in Helsinki on Monday. So should their senior staff.

I don’t suggest this lightly. I’ve known both men for years, respect them, and wrote friendly columns when they took their current jobs. I share many of their hawkish views, and have applauded some of the administration’s controversial foreign policy decisions, particularly the withdrawal from the Iran nuclear deal.

I’m also cognizant of two factors weighing against resignation. First, cabinet members and other senior White House officials owe a president deep loyalty whatever their policy differences — the sort of loyalty George Marshall showed when he declined to resign as secretary of state despite his fierce opposition to Harry Truman’s decision to recognize Israel.

I agree with those commenters who say the president has committed treason. Here is comment that I also endorsed though:

“By continuing to serve the president, Pompeo and Bolton and their top aides are not — as they doubtlessly tell themselves in humiliating moments like this one — cleaning up after him. They are covering up for him.”

I’d use another word: “enabling,.” As they sit their silently, clearly uncomfortable with, hints of benign smiles on their faces, they form a wall of complicity with a president who is out for himself, even if that means embracing an autocrat.

I’ve wondered too just what Pompeo and Bolton are doing by participating in this wretched administration that violates just about everything they’ve stood for all their professional lives.

I may not have agreed with them, but I never doubted their patriotism and desire to serve America.

They look like so many pictures on a wall, disposable, and immovable, with no impact on a presidency run amok.

It’s also tiring to hear the most likely excuse, “if we don’t stay, things will get worse.”

So let them! Let the world and America see the full impact of the president’s folly. Don’t protect him or lend the aura of respectability.

If you can’t rein the president as he blows up 70 years of US foreign policy making, then leave.

Your departures just might bring more Americans to their senses as they follow the Pied Piper of Putin over a cliff.