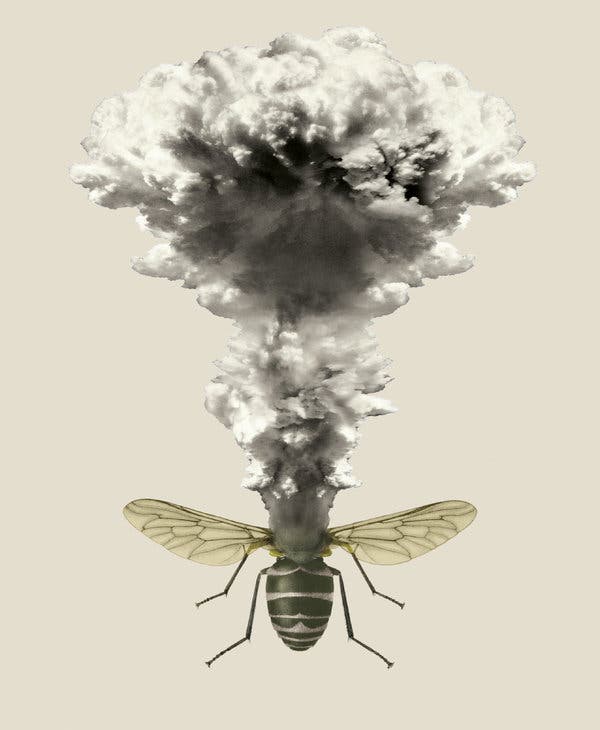 “Because insects are legion, inconspicuous and hard to meaningfully track, the fear that there might be far fewer than before was more felt than documented. People noticed it by canals or in backyards or under streetlights at night — familiar places that had become unfamiliarly empty. The feeling was so common that entomologists developed a shorthand for it, named for the way many people first began to notice that they weren’t seeing as many bugs. They called it the windshield phenomenon.

To test what had been primarily a loose suspicion of wrongness, Riis and 200 other Danes were spending the month of June roaming their country’s back roads in their outfitted cars. They were part of a study conducted by the Natural History Museum of Denmark, a joint effort of the University of Copenhagen, Aarhus University and North Carolina State University. The nets would stand in for windshields as Riis and the other volunteers drove through various habitats — urban areas, forests, agricultural tracts, uncultivated open land and wetlands — hoping to quantify the disorienting sense that, as one of the study’s designers put it, “something from the past is missing from the present.”

When the investigators began planning the study in 2016, they weren’t sure if anyone would sign up. But by the time the nets were ready, a paper by an obscure German entomological society had brought the problem of insect decline into sharp focus. The German study found that, measured simply by weight, the overall abundance of flying insects in German nature reserves had decreased by 75 percent over just 27 years. If you looked at midsummer population peaks, the drop was 82 percent.”

via The Insect Apocalypse Is Here – The New York Times

David Lindsay: Thank you Brooke Jarvis.  Here are the two top comments which I endorsed:

I live in the midwest and have marketed field and farm seed for over 40 years. When you walk in a field of GMO corn that has been sprayed with Glyphosate AND the plant is producing proteins that when ingested by bugs kills them…you have a field with NO BUGS…not a sound. No buzzing. Nothing. Then you spray the the soybean field next to it for aphids in July with a non selective insecticide and you kill more beneficial bugs than the target bug you are after. Big Ag is destroying the planet under the guise of ‘we will all starve if we don’t do it this way” Time for the public to wake up.

I’ve lived on a small patch of old growth forest in the center of NJ for 25 years, I’ve kept bees for 10. When the kids were little we would go out into the nearby fields to catch the huge grasshoppers that sprung up at every step. My grandchildren have never seen a grasshopper. My first colony of bees lived 5 years. The last two years both colonies have died both years. I believe that the change is accelerating, 25 years ago we had bats, swallows, orioles, bluebirds and owls. They are all gone now.