By Agnès C. Poirier
Ms. Poirier is a writer and political commentator. 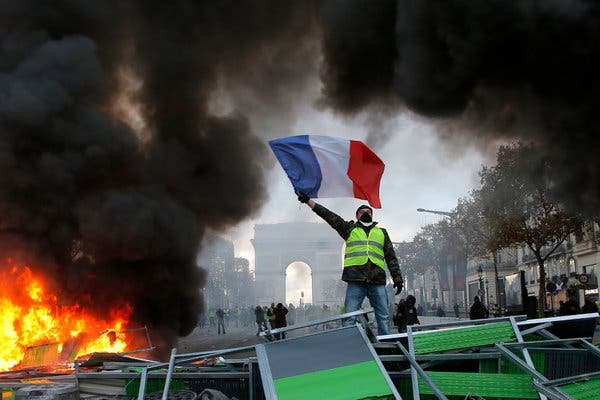 A member of the Gilets Jaunes, or Yellow Vests movement, at a protest against rising fuel taxes, on the Champs-Élysées in Paris on Saturday.
Credit
Michel Euler/Associated Press

PARIS — Familiar Parisian images are back in the news: black smoke billowing from makeshift barricades on the Champs-Élysées; cobblestones hurled at the police by protesters; the Arc de Triomphe disappearing behind a cloud of tear gas. But this time, the images feature something new: The protesters are wearing yellow, high-visibility vests.

They aren’t longhaired students or militant trade unionists or even angry farmers. They are unaffiliated with a political party and they come from a variety of class backgrounds. Leaderless, they have gathered thanks to social media and they have pointedly called themselves Gilets Jaunes, or Yellow Vests. They are shaking French politics to the core.

The movement began about a month ago, with groups of friends on Facebook complaining about an increase in diesel prices put in place by the government of President Emmanuel Macron to try to curb carbon emissions. Seemingly from nowhere, the disparate conversations converged on a date for action: Nov. 17. Hundreds of thousands would gather around the country to demonstrate against the fuel price hike, which they feel unfairly burdens the millions of people who live in small towns and the countryside, where they can’t get around by public transportation or electric scooters.

Their high-visibility yellow vests — which French drivers are legally required to keep in their vehicle to make sure they are seen on the side of the road if their car breaks down — identify them as car drivers rather than metro riders. But they also send a clear message: They want to be seen by their young president.