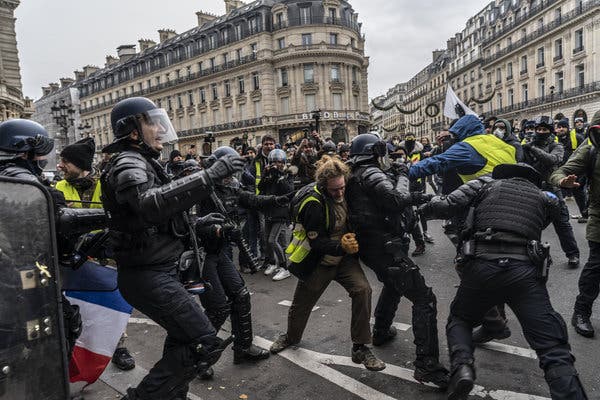 PARIS — Ever since World War II, the liberal global order that has spread more freedom and prosperity around the world than at any other time in history has been held up by two pillars: the United States of America and the United Nations of Europe, now known as the European Union.

Both of these centers of free markets, free people and free ideas are being shaken today by rural and beyond-the-suburbs insurgencies of largely white working-poor and anxious middle classes, which have not generally benefited from the surges in globalization, immigration and technology that have lifted superstar cities like London, Paris and San Francisco and their multicultural populations.

Having just seen the shocking sight of Parisian stores boarded up right before Christmas to protect against rioting along the Champs-Élysées by some of France’s yellow-vested protesters; after being told in Rome a few days earlier that Italy, a founding member of the E.U., could conceivably shuck off both the E.U. and the euro one day under its new bizarre far-left/far-right governing coalition; after watching Britain become paralyzed over how to commit economic suicide by leaving the E.U.; and after watching President Trump actually cheer for the breakup of the E.U. rather than for its good health, it is obvious to me that we’re at a critical hinge of history.

via Opinion | The End of Europe? – The New York Times