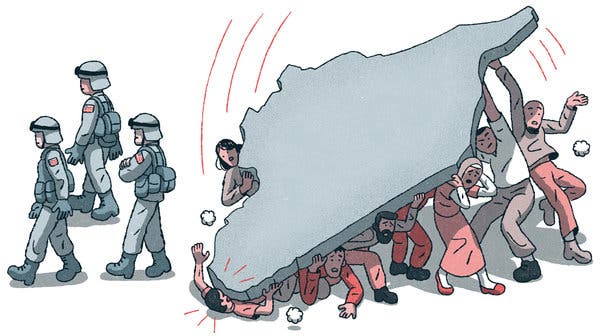 CreditCreditTim Peacock
It was less than three months ago that John Bolton, the national security adviser, declared an expanded objective for American troops in Syria.

The goal is not just defeating the Islamic State, but also ensuring that Iranian forces leave the country, he told reporters in what seemed like an authoritative statement of official policy.

Only, as is so often the case with Donald Trump’s chaotic presidency, it apparently wasn’t.

On Wednesday, Mr. Trump summarily overruled Mr. Bolton and the rest of his national security team. He ordered the withdrawal of all 2,000 American ground troops from Syria within 30 days.

That abrupt and dangerous decision, detached from any broader strategic context or any public rationale, sowed new uncertainty about America’s commitment to the Middle East, its willingness to be a global leader and Mr. Trump’s role as commander in chief.

via Opinion | Trump’s Decision to Withdraw From Syria Is Alarming. Just Ask His Advisers. – The New York Times

Vladamir Putin and Recep Tayyip Erdogan applaud vocally Trump’s announcement that he will have the last 2000 US troops withdraw from Syria in the next 30 days.
The NYT is properly horrified. They write: “Among the biggest losers are likely to be the Kurdish troops that the United States has equipped and relied on to fight the Islamic State in Iraq and Syria. Turkey’s president, Recep Tayyip Erdogan, considers many of the Kurds to be terrorists bent on destroying his country. In recent days he has vowed to launch a new offensive against them in the Syrian border region. Mr. Trump discussed his withdrawal decision in a telephone call with Mr. Erdogan on Friday.

The American withdrawal is likely also to worry Israel, anxious about Iran’s robust military presence in Syria, and Jordan, which bears a considerable burden from Syrian refugees who fled the fighting across the border.

Decisions of such consequence normally are thoroughly vetted by a president’s national security advisers. But congressional lawmakers said there were no signs that any process was followed, and a senior White House official, refusing to discuss internal deliberations, said Wednesday, “The issue here is the president made a decision.”

It’s hard not to wonder whether Mr. Trump is once again announcing a dramatic step as a way of deflecting attention from bad news, in this case a torrent of legal judgments that are tightening the legal noose around him.”

DL: Our ill-conceived interventions played a major role in creating the monster of ISIS. If we abandon our fighting Kurds, we leave the whole mess for ISIS to come back, and for Russia and Iran to dominate much of the region.