Aaron Davis, a British botanist, has spent 30 years trekking across forests and farms to chronicle the fate of one plant: coffee. 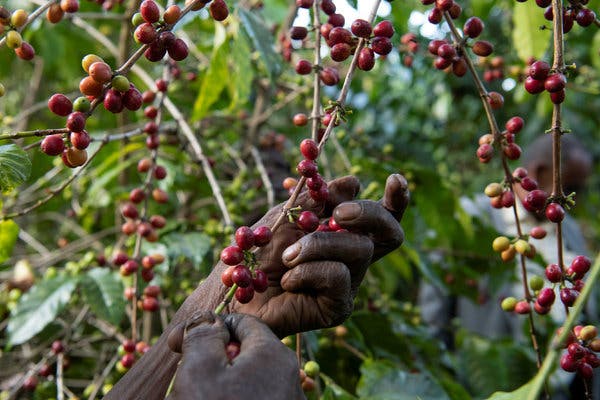 He has recorded how a warming planet is making it harder to grow coffee in traditional coffee-producing regions, including Ethiopia, the birthplace of the world’s most popular bean, arabica. He has mapped where farmers can grow coffee next: basically upcountry, where it’s cooler. He has gone searching for rare varieties in the wild.

Now, in what is perhaps his most disheartening research, Dr. Davis has found that wild coffee, the dozens of varieties that once occurred under forest canopies on at least three continents, is at risk of vanishing forever. Among the world’s 124 coffee species, he and a team of scientists have concluded, 60 percent are at risk of extinction in the wild. Climate change and deforestation are to blame.

It matters because those wild varieties could be crucial for coffee’s survival in the era of global warming. In those plants could lie the genes that scientists need to develop new varieties that can grow on a hotter, drier planet.

Ouch. This hurts. Here are the top three NYT comments I endorsed:

Thanks to Mr. Davis and those who are testing and preserving this remnant of Earth’s heritage.

Having visited various coffee variety collections around the world, some formerly supported by the ICO (international coffee org), I can attest to the note about a lack of funding and old specimen plants. I was just at Coffee Research in Kenya a couple months ago and the collection appears on the verge of death. Preserving coffee genetic diversity might hinge on plants in these collections and it’s doubtful those plants will last much longer. When the ICO was strong these gardens were remarkable, well funded and kept fresh with new plant material. It’s so important to underscore the economic importance of coffee to smallholder farmers, how it provides cash income to so many millions globally. It’s already a weak plant with inconsistent fruiting from year to year. If it’s further diminished by climate shift, the effect on small farmers and the rural economies in so many nations is huge. For me, that’s a chief reason to sound an alarm. For the environment, Arabica coffee is almost like an indicator species, and one easy to get the public to pay attention to! Even in the short 20 yrs I’ve been a coffee buyer there are areas that produced good volumes of good coffee that are no longer able to farm due to global warming. Insects (coffee berry borer) and fungus (rust/roya lead fungus) spread in these areas as temperatures rise and devastate the coffee plants. In Colombia, there are parts of Huila that were flush with coffee 20 years ago and can’t grow it now.

I believe the climate has already passed the tipping point. With human populations continuing to explode I doubt there is any way to avoid the extinction of many species, including humans.