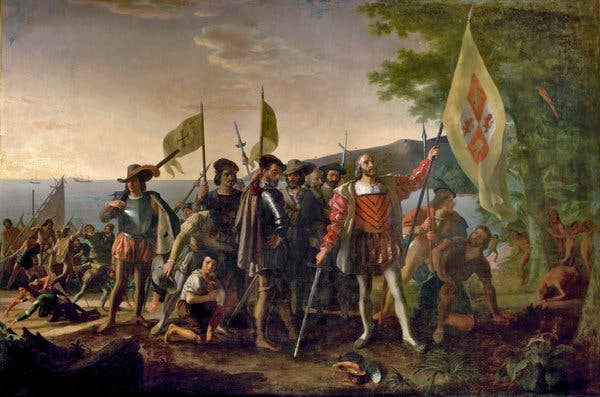 Columbus lands in Bahamas.
“When they arrived in the Americas centuries ago, European colonists brought pestilence and death. Their arrival was so devastating, in fact, that it may have contributed to a period of global cooling, according to a new study.

The research, to be published in the March issue of the journal Quaternary Science Reviews, represents an ambitious attempt to show that, through a series of events, human activity was affecting the climate long before the industrial revolution and global warming.

The authors found that disease and war wiped out 90 percent of the indigenous population in the Americas, or about 55 million people. The earth, they argue, then reclaimed the land that these populations left behind. The new vegetation pulled heat-trapping carbon dioxide from the atmosphere and into the land, contributing to what scientists refer to as the “Little Ice Age.”

“It was a drastic change in the earth’s system,” said Alexander Koch, the study’s lead author and a Ph.D. candidate at the University College London Department of Geography.”