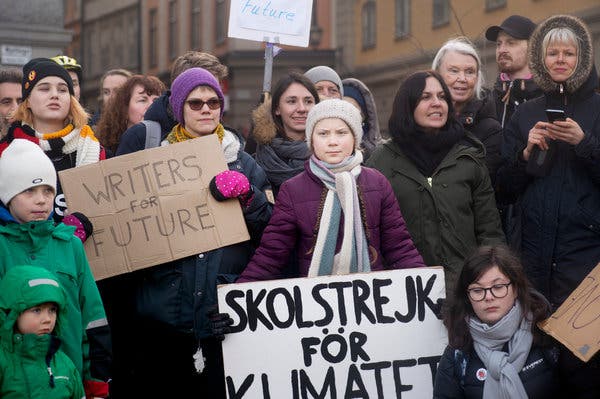 Small, shy, survivor of crippling depression, Greta Thunberg, the 16-year-old Swedish girl skipping school to shame the world into addressing climate change, drew a parade of fans one Friday in February on a frozen square in Stockholm.

Six Swiss students had traveled 26 hours by train to seek her support for their petition for a tougher Swiss carbon emissions law. An Italian scientist told her she reminded him of his younger, activist self. A television news crew hovered around her. Women from an antismoking group came to give her a T-shirt.

All this attention, she said out of earshot of the others, is great. It means “people are listening.” But then, a knife-blade flash of rage revealed itself.

“It’s sometimes annoying when people say, ‘Oh you children, you young people are the hope. You will save the world’” she said, after several grown-ups had told her just that. “I think it would be helpful if you could help us just a little bit.”

via Becoming Greta: ‘Invisible Girl’ to Global Climate Activist, With Bumps Along the Way – The New York Times