By Philip N. Howard
Professor Howard is the director of the Oxford Internet Institute and the author of “Pax Technica: How the Internet of Things May Set Us Free or Lock Us Up.” 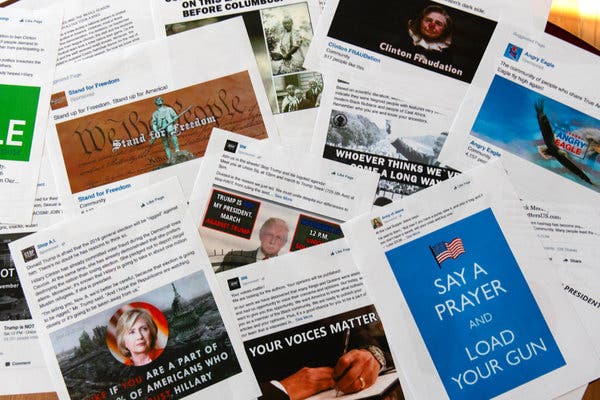 Some of the Facebook ads linked to a Russian effort to disrupt the 2016 American presidential election, released by members of the House Intelligence Committee in late 2017.
Credit
Jon Elswick/Associated Press

“Despite the best efforts of several technology firms, there still seem to be secretive groups distributing political ads without disclosing who is funding those ads. Even if Facebook starts discouraging advertisers from targeting users on the basis of race, gender or age, as it recently announced, the wealth of existing data that it has already collected will still allow advertisers to do sophisticated ad targeting.

Social media firms want to regulate themselves, and Google has threatened to withdraw all political ads in Canada if it finds transparency rules too onerous. Facebook offers political ad archives in a few countries, and searching by hand is laborious. Independent researchers can investigate trends computationally, but Facebook, Twitter and Google are doing more and more to restrict access. There is negligible access to Instagram, where huge volumes of Russian-origin misinformation now flows. Banning political ads or creating partial ad archives in some countries won’t strengthen the world’s democracies. Ad bans give incumbent politicians an unfair advantage, and establishing partial ad archives gives political ad buyers an incentive to not declare their ads as political.

Elections officials and ad regulators in the world’s democracies urgently need to sort this out: Nearly a billion people in India and across Europe will prepare to vote in the next few months, and presidential campaigning in the United States has already started. The solution is to have all technology companies put all ads, all the time, into public archives.”