Meet the Other Resistance: The Republican One
President Trump is overwhelmingly popular with his base, but a handful of dissident Republicans think they know how to defeat him in a primary contest. Are they wrong?

105
William F. Weld is not likely to become our 46th president. But he was here in New Hampshire, no other Republicans were and that was something.

“I think it’s important to at least call out the current incumbent of the White House on his simply amazing behavior, and for the pettiness, his vindictiveness and the unreconstituted meanness he displays,” Weld was telling the crowd who had turned out to see him on a rainy Sunday afternoon in March at a house party in the town of Dover. Fergus Cullen, a former chairman of the state Republican Party, was hosting the gathering in his honor.

Weld, a two-term Republican governor of Massachusetts more than two decades ago, is 73, tall and slim with a mop of orange hair and a face the hue of Pepto-Bismol. A Harvard and Oxford graduate, Weld worked in the Reagan Justice Department but quit over a series of ethics scandals involving his boss, Attorney General Ed Meese. He ran briefly for governor of New York after leaving Massachusetts, endorsed Obama in 2008 and raised a bunch of money for Romney in 2012. He has written thrillers, dabbled in historical fiction and was last heard from in 2016 as the vice-presidential running mate to the Libertarian nominee, Gary Johnson. He sets off some dilettante alarms.

But he was the only Republican candidate who had announced his exploratory plans — he would officially declare his candidacy in April — to run against Donald Trump in the 2020 Republican primary. This made him the lone official vehicle for the aspirations of a persistent group of Never Trump Republicans. For the better part of two years, they had waited for a premium primary challenger to come along from a fantasy field of Nikki Haleys, Ben Sasses and Mitt Romneys — all of whom eventually opted out of running. Even Weld seemed disappointed by this. “I have been astounded that no one else has stepped forward,” he told the assembled guests.”

David Lindsay Jr.
Hamden, CT | Pending Approval
Interesting article, but also very disappointing. I thought I was going to learn a lot about William Weld, and the last 3/4 of the article was about much less relevant stuff and gossip. Weld has a history, too bad we didn’t learn about it. And abhorent to me, is that Mark Leibovich called Weld a dillitant, because he has authored books. I have nothing but expletives deleted for that low brow shot.
David Lindsay Jr. is the author of “The Tay Son Rebellion, Historical Fiction of Eighteenth Century Vietnam” and blogs at TheTaySonRebellion.com and InconvenientNews.wordpress.com. He performs a folk concert of songs and stories about Climate Change and the Sixth Extinction. 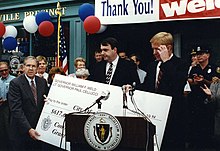 In 1990, Weld announced his candidacy for Governor of Massachusetts, to replace the out-going Michael Dukakis.[12] Although Republicans made up under 14% of the Massachusetts electorate and a Republican had not won the gubernatorial election since 1970, Weld’s liberal stances on social issues made him a viable candidate for office in the heavily Democratic state.[13] At the state Republican convention, party officials backed Steven Pierce over Weld, and initial polling had Pierce ahead by 25 percentage points.[14] Weld gained enough support to force a primary, and in an upset election, Weld won the Republican nomination over Pierce by a 60–40 margin.[15]

In the general election, he faced John Silber, the president of Boston University. Polls showed Weld anywhere from a statistical tie to trailing by as many as ten points.[16] Voter dissatisfaction with the state’s Democratic majority gave Weld support for his promises to reduce the state deficit, lower the unemployment rate, and cut taxes.[17] On November 6, 1990, he was elected as the 68th Governor of Massachusetts by a 50–47 margin, to become the first Republican governor of Massachusetts since Francis W. Sargent left office in 1975. Governor Weld is generally considered to have been a moderate or liberal Republican Governor.[18][19][20][21] He is fiscally conservative and socially liberal.[22][23]

The business community reacted strongly to Weld’s leadership. In a 1994 survey of chief executives conducted by the Massachusetts High Technology Council, 83% of those polled rated the state’s business climate as good or excellent—up from only 33% at the beginning of his term. Proponents might claim that Weld’s leadership changed the minds of 50% of the CEOs surveyed while others would note the national economic trends or other factors might play a part. Weld also reaped the benefits of the 1990s’ prosperity, as the state’s unemployment rate fell by more than 3 percentage points during his first term, from 9.6% in 1991 to 6.4% in 1994. As a result, Weld received grades of A in 1992,[24][25]B in 1994,[26][27] and B in 1996[28][29] from the Cato Institute, a libertarian think tank, in their biennial Fiscal Policy Report Card on America’s Governors. In 1993 he supported adoption of a gun control bill in Massachusetts that included limits on gun purchases under age 21, as well as prohibiting certain types of weapons, which was not ultimately passed.[30] He has since renounced this proposal.[31] Weld is pro-choice and helped to introduce legislation to make it easier for women to access abortion procedures.[32] As Governor, he supported gay and lesbian rights. In 1992, he signed an executive order to recognize domestic partnership rights for same-sex couples.[33] In 1993, he signed into law legislation protecting the rights of gay and lesbian students.[34] He also said he would recognize same-sex marriages that might be performed out of state following a court decision in Hawaii.[35][36] During his term, he launched a successful effort to privatize many state’s human services, laying off thousands of state employees.[37][38] He also worked to expand Medicaidaccess by requesting more federal funding and, then, allowing more residents to qualify for the plan to both solve budget problems and increase access to health care in the state.[39] After cutting state spending year-over-year for his first two years, the Republican Party lost its ability to sustain a veto in the legislature due to losses in the Massachusetts State Senate, forcing Weld to make greater concessions to Democratic legislators.[40]

In 1994, Weld won reelection with 71% of the vote in the most one-sided gubernatorial contest in Massachusetts electoral history.[citation needed] Weld carried all but five towns in the whole state, even carrying Boston.[citation needed] Following his landslide victory, Weld briefly considered running for the presidency in 1996.[citation needed]