A Family Dollar store security guard who was killed in Flint, Mich., on Friday was shot after telling a customer that her child had to wear a face mask to enter the store, the county prosecutor’s office said Monday.

The argument began when the security guard, Calvin Munerlyn, 43, told Sharmel Lashe Teague, 45, that customers needed to wear face masks in the store, Genesee County Prosecutor David Leyton said at a news conference Monday. She yelled at him, spit on him and drove off, Leyton said. About 20 minutes later, her car returned to the store, and her husband, Larry Edward Teague, 44, and son, Ramonyea Travon Bishop, 23, stepped out and confronted Munerlyn, according to investigators who spoke to witnesses in the store and reviewed surveillance video. Bishop pulled out a gun and shot Munerlyn, Leyton said.

Leyton said Munerlyn was doing his job, protecting others and enforcing a statewide executive order. In Michigan, people are required to wear face coverings in grocery stores. Stores can refuse service to anyone who is not wearing a mask. 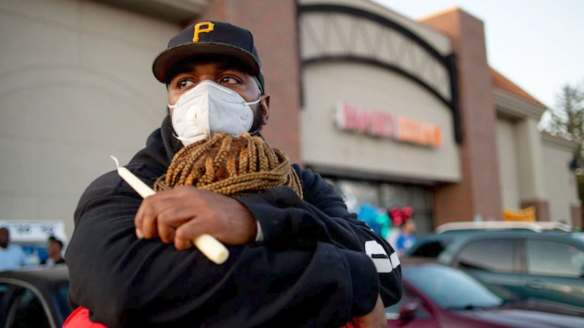