“Yes, it is getting hotter. And while you might be able to escape the intensifying tropical storms, flooding or droughts by moving elsewhere, refuge from extreme heat is no longer easy to find.

Summers that seemed exceedingly hot 50 years ago are becoming much more commonplace. The extreme heat of that era — which had a chance of occurring of only one-tenth of 1 percent during the summer season — is now reached more than 20 percent of the time, according to calculations by the climate scientist James Hansen. That’s 200 times as often. And nights are warming faster than days, at nearly twice the rate. So much for relief.

And though the deadly, intense heat that baked the Pacific Northwest and Western Canada recently was startling, extremely hot temperatures have struck elsewhere in recent years, in surprising places and with calamitous consequences.

This should be reason enough — along with the recent disastrous floods in China, Germany and other European countries — to move quickly to drastically reduce greenhouse gas emissions to limit global warming.”

“Yes, it is getting hotter. And while you might be able to escape the intensifying tropical storms, flooding or droughts by moving elsewhere, refuge from extreme heat is no longer easy to find.

Summers that seemed exceedingly hot 50 years ago are becoming much more commonplace. The extreme heat of that era — which had a chance of occurring of only one-tenth of 1 percent during the summer season — is now reached more than 20 percent of the time, according to calculations by the climate scientist James Hansen. And nights are warming faster than days, at nearly twice the rate. So much for relief.”

“Last month was the hottest June on record in North America, with more than 1,200 daily temperature records broken in the final week alone. But overlooked in much of the coverage were an even greater number of daily records set by a different — and potentially more dangerous — measure of extreme heat: overnight temperatures.

On average, nights are warming faster than days across most of the United States, according to the 2018 National Climate Assessment Report. It’s part of a global trend that’s being fueled by climate change.

Unusually hot summer nights can lead to a significant number of deaths, according to climate scientists and environmental epidemiologists, because they take away people’s ability to cool down from the day’s heat.”

Thank you Catrin Einhorn for your work. This piece, though excellent, is devastating. The comments after it are inspiring, in the recoconition of so many readers of alarm and grief and fear for the future. My partner and I are writing and performing a folk concert on these issues, and here is paragraph from one of our readings: “DL.V2: Edward O. Wilson, the famous Harvard entomologist, now retired, has written that at our present course of human growth, we might lose 50 to 80% of the earth’s species in the next 100 years. (2) E.O. Wilson and his scientific colleagues around the world are deeply concerned. They suspect that only about 10% of this world’s biodiversity has been identified and named— KS.V1: and they see that Earth is losing species of animals and plants before we know much about them, about their qualities, habitat, about how they support the ecosystems where they thrive. These scientists think that if we do lose 50% or more of the world’s species, then homo sapiens will probably disappear. When the dinosaurs died out, so did possibly 95% of all species at that time. (3) These scientists are sounding an alarm. ”

David Lindsay Jr is the author of the Tay Son Rebellion about 18th century Vietnam, and blogs at InconvenientNews.Net. He is currently writing a book about his concert and show “Noah’s Ark, 2.0. on climate change and the sixth extinction.”

“In the old days, we could escape the summer heat by heading north — to the Adirondacks in the East or to the cool, forested Pacific Northwest in the West.

But this is not your grandparents’ climate.

And though we’re only one week into official summer, the characteristically cool Pacific Northwest has turned into a caldron of triple-digit temperatures, with Portland, Ore., and Seattle reaching record highs of 115 and 108 degrees, respectively. That’s unseasonably hot — for Phoenix.

The western United States is currently under the influence of an epic heat dome, an expansive region of high atmospheric pressure characterized by heat, drought and heightened fire danger. It’s being called a once-in-a-millennium event, which means you might have expected to witness it once during your lifetime — if you happen to be Methuselah of biblical fame.” . . .

Reflections on a three-decade legacy

“The International Geosphere-Biosphere Programme (IGBP) will come to a close at the end of this year after three decades of fostering international collaborative research and synthesis on global change.

The organisation’s legacy is embodied in its scientific publications; the workshops and conferences it organised; the close interaction it fostered with policy and assessment processes such as the Intergovernmental Panel on Climate Change (IPCC); and its innovative approaches to communication and outreach. It will leave behind a strong record in building networks as well as enhancing research capacity around the world.

The IGBP Secretariat, which has been housed by the Royal Swedish Academy of Sciences (RSAS) in Stockholm for over 25 years, will vacate its offices at the end of this year. The IGBP website will not be updated from the 27th of November. However, it will remain accessible until 2026. An electronic archive of important documents will be available with our sponsor, the International Council for Science (ICSU). A hard copy archive will be held at the RSAS. . . . “

A decade on, IGBP in collaboration with the Stockholm Resilience Centre has reassessed and updated the Great Acceleration indicators, first published in the IGBP synthesis, Global Change and the Earth System in 2004.

The trajectory of the Anthropocene: The Great Acceleration (Anthropocene Review) 15 January 2015.

“Human activity, predominantly the global economic system, is now the prime driver of change in the Earth System (the sum of our planet’s interacting physical, chemical, biological and human processes), according to a set of 24 global indicators, or “planetary dashboard”, published in the journal Anthropocene Review (16 January 2015).”

“The United States is getting redder.

No, not that kind of red. (We’ll leave that to the political pundits.) We’re talking about the thermometer kind.

The National Oceanic and Atmospheric Administration last week issued its latest “climate normals”: baseline data of temperature, rain, snow and other weather variables collected over three decades at thousands of locations across the country. 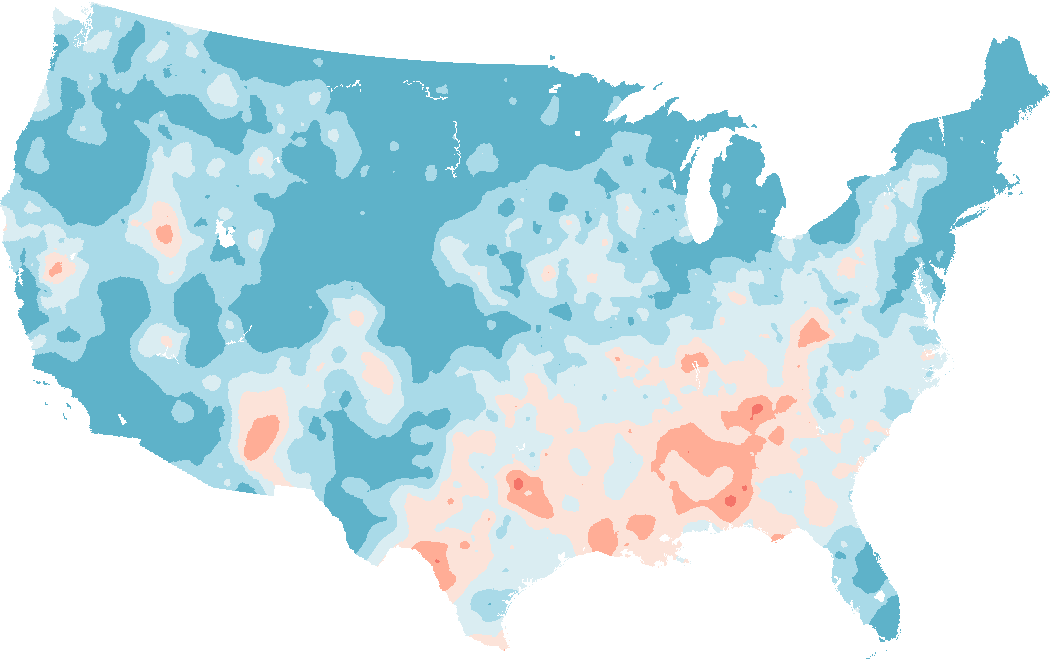 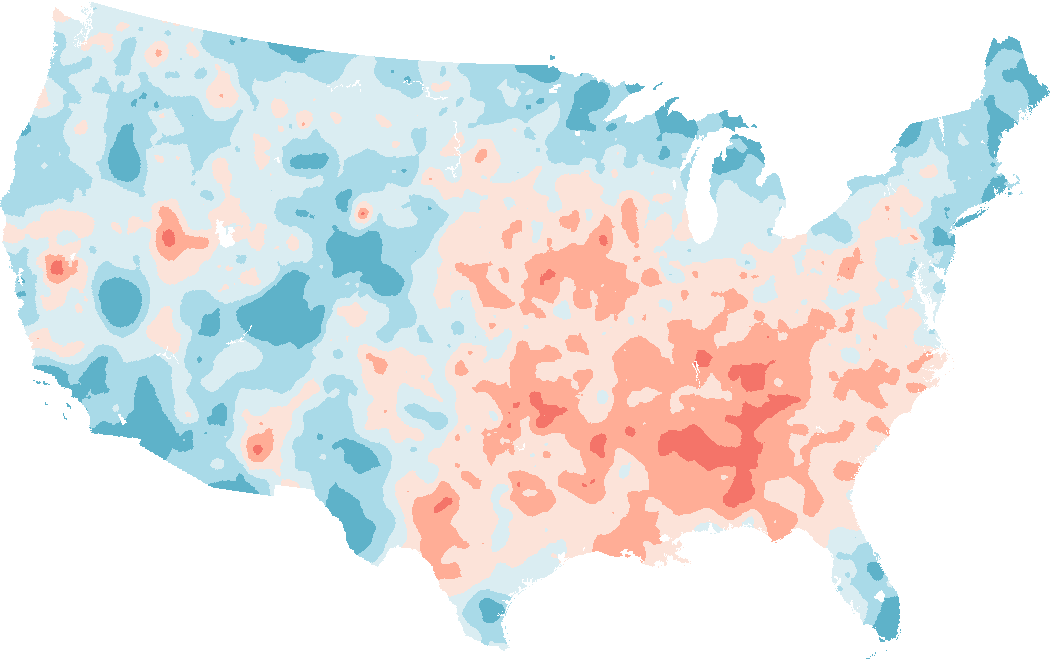 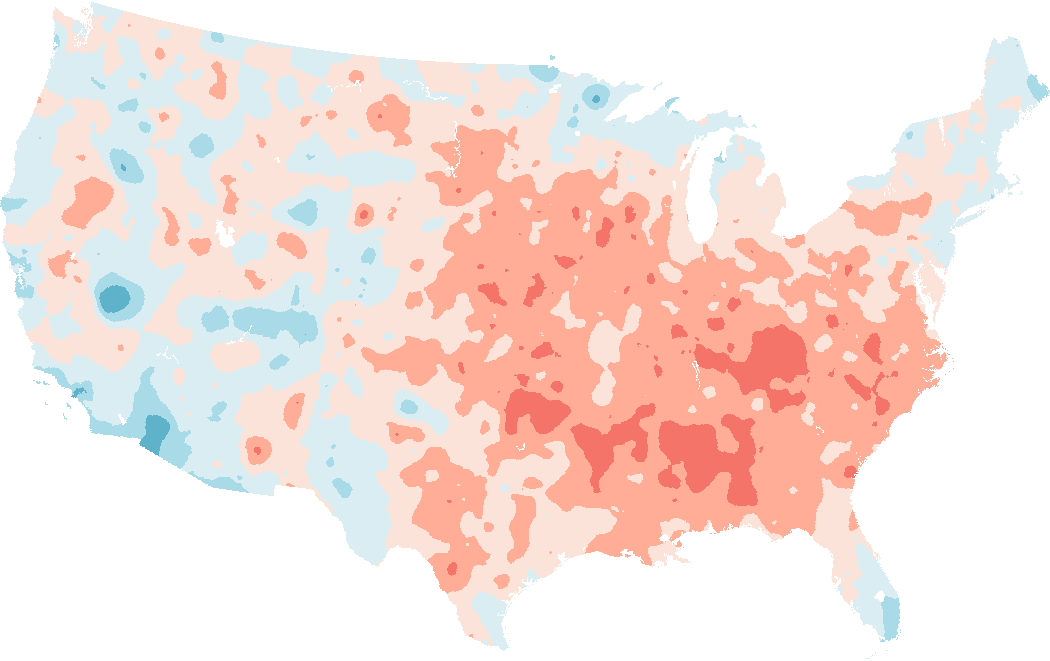 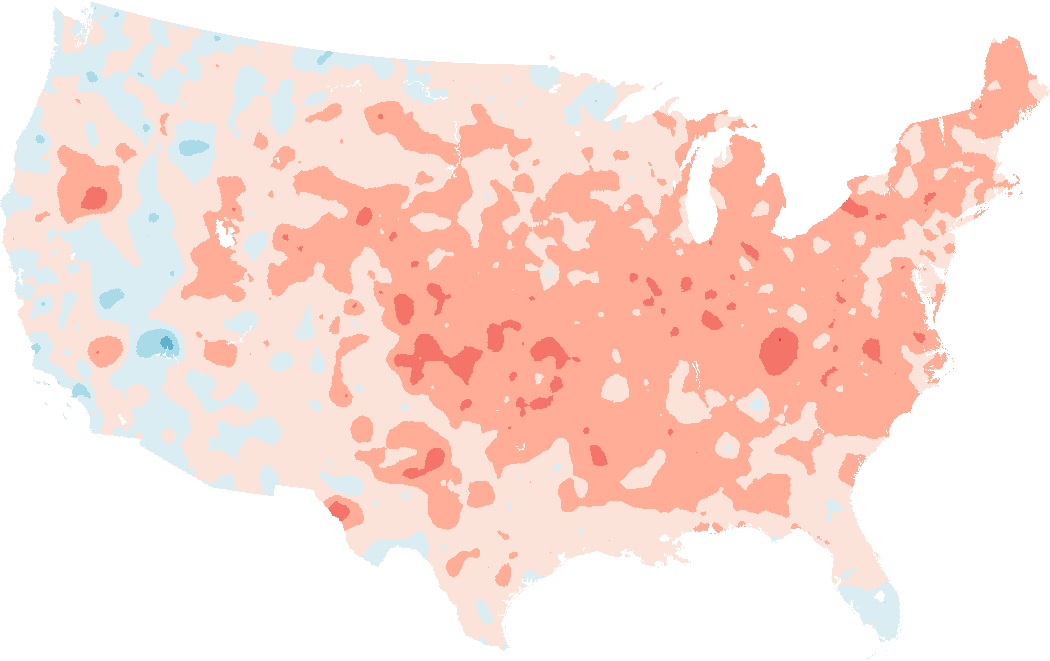 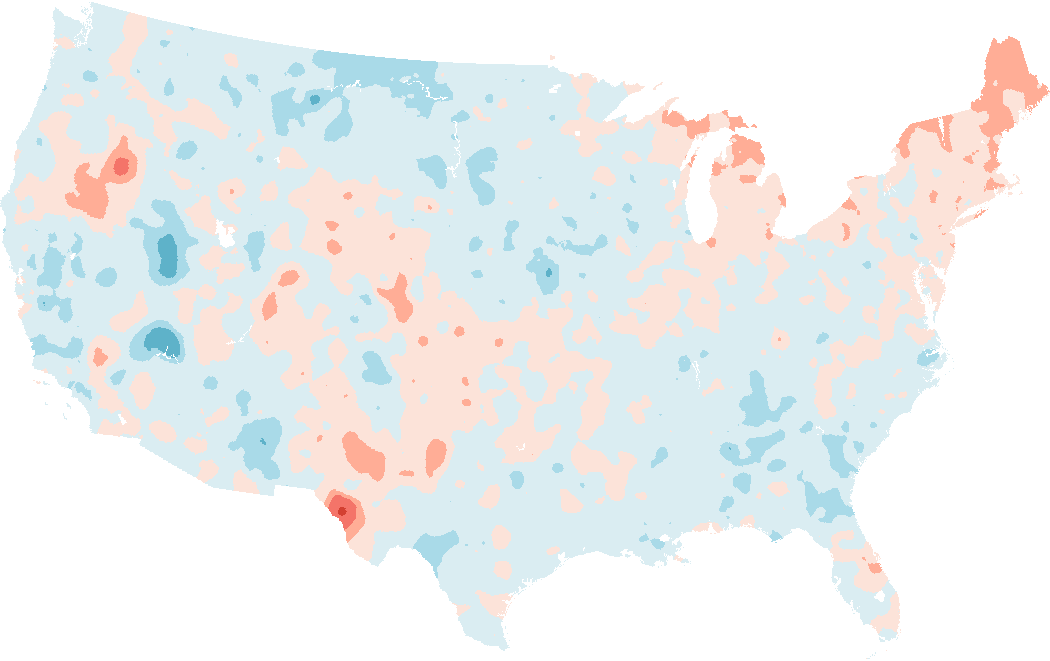 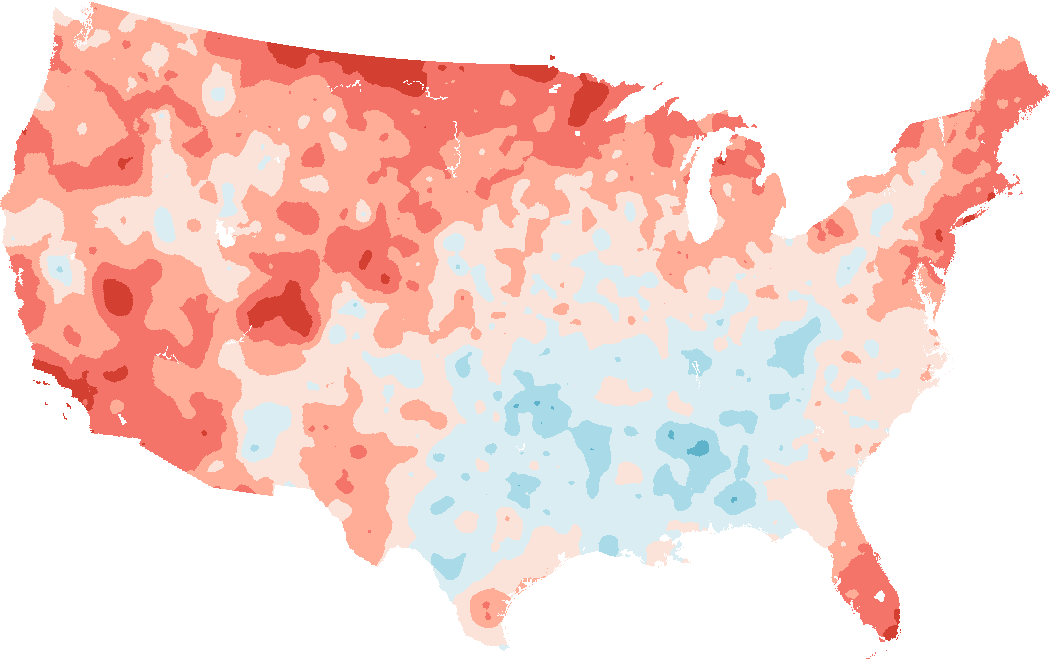 This briefing addresses grave scientific concerns in relation to proposed
geoengineering techniques such as solar radiation management (SRM).
“Geoengineering” as used here does not refer to negative emissions technologies that
remove CO2 from the atmosphere (carbon dioxide removal or CDR) as part of the
energy system or through ecosystem restoration and afforestation or reforestation.
Here we specifically address the risks posed by SRM.
Fahad Saeed, Carl-Friedrich Schleussner, William Hare
Summary
Solar radiation management is not a solution to the climate problem
Solar radiation management does not address the drivers of human-induced climate
change, nor does it address the full range of climate and other impacts of
anthropogenic greenhouse gas and air pollutant emissions. Solar radiation
management aims at limiting temperature increase by deflecting sunlight, mostly
through injection of particles into the atmosphere. At best, SRM would mask warming
temporarily, but more fundamentally is itself a potentially dangerous interference
with the climate system.

“Konrad Steffen, an Arctic scientist whose work showed that climate change is melting Greenland’s vast ice sheet with increasing speed, died on Saturday in an accident near a research station he created there 30 years ago. He was 68.

Police investigators said he had fallen into a crevasse in the ice and drowned in the deep water below.

A fellow scientist at the station, Jason Box, said the crevasse, or large crack, was a known hazard. But he added that high winds and recent snowfall had made visibility poor and landmarks harder to spot.

The small group at the site — christened Swiss Camp by Dr. Steffen — was installing new equipment when he walked off to perform another task. Over the next few hours, Dr. Box said, they assumed that Dr. Steffen had gone back to his tent for a nap. But when they finished their work he was nowhere to be found.”

“Humble dirt could pack an unexpected climate punch, according to a new study published Wednesday in the journal Nature. An experiment that heated soil underneath a tropical rainforest to mimic temperatures expected in the coming decades found that hotter soils released 55 percent more planet-warming carbon dioxide than did nearby unwarmed areas.

If the results apply throughout the tropics, much of the carbon stored underground could be released as the planet heats up.

“The loss rate is huge,” said Andrew Nottingham, an ecologist at the University of Edinburgh, who led the study. “It’s a bad news story.”

The thin skin of soil that covers much of our planet’s land stores vast amounts of carbon — more, in total, than in all plants and the atmosphere combined. That carbon feeds hordes of bacteria and fungi, which build some of it into more microbes while respiring the rest into the atmosphere as carbon dioxide. Many of these microbes grow more active at warmer temperatures, increasing their digestion and respiration rates.”