“What do conservative political figures like Ted Cruz, Steve Bannon, Karl Rove and Richard Nixon have in common with liberal politicians like Elizabeth Warren, Andrew Yang, Kamala Harris and Bill Clinton? They all honed their skills of rhetoric, reasoning and persuasion on school debate teams.

That’s no surprise. Excelling in school debate opens many academic and professional doors, conferring prestige and signaling exceptional verbal and logical aptitude. Some of those skills will no doubt be on display at the Democratic presidential primary debate on Tuesday.

But while school debate can be good for aspiring politicians, it may not be good for our politics. In particular, it may contribute to the closed-minded, partisan and self-interested nature of so much of today’s public and political dialogue.

Why? Because school debate ultimately strengthens and rewards biased reasoning.

In traditional debate competitions, teams are assigned at random to argue one or the other side of an issue. Each round, one team is assigned the affirmative view — say, “Recreational drug use should be legalized” — and the other team, the negative. That means teams start with a conclusion, whether they endorse it or not, and work backward from there, marshaling the best arguments they can devise to make that conclusion come out on top.

The goal is not to determine the most reasonable or fair-minded approach to an issue, but to defend a given claim at all costs. This is an exercise not in deliberation but in reasoning with an agenda.”

David Lindsay: This essay turned out to be the most challenging piece I read over the weekend.  It also highlights the value of the comments section of the Times, which I have become a fan of  The piece moved me to question the validity of my own daughter’s extraodinary experince on the Hamden High School debate team, where she became the Captain for two years.  I was a judge on two different 8 hour Saturdays, and was deeply moved and humbled by the experience.

The comments take apart the articulate essay above, with a hundred cuts, starting with this most recomended comment:

As a thirty year speech and debate coach at a public high school and now fifteen years beyond that with university students debating overseas, I disagree with with the conclusions of these authors. Debate is more than a training ground for lawyers and politicians. It is about building critical thinking skills not often taught in a regular school setting. Creating an environment to build confidence as a public person, acquiring research skills, teamwork, appreciation for multiple sides of an argument, putting oneself in the shoes of another by arguing a different perspective than their own are just a few benefits of debate. Debate is an academic sport. I was fortunate to witness one of my all female teams win a state championship in the late 70’s at a time when athletics were slow getting started in schools and debate typically was dominated by males. The authors should also get updated on the several debate styles being practiced in classrooms across the country. They refer to a policy-style team debate but now we have Lincoln Douglas Values debates, Public Forum Debates, parliamentary debates and others. True enough, lots of students become lawyers and politicians but I have seen many students engage in the activity because it has intrinsic value. I would invite them to locate a local high school or look up a high school tournament at a nearby university and volunteer to judge debates. I think it will change their views about school debates.

“When you ask American teenagers to pick a single word to describe how they feel in school, the most common choice is “bored.” The institutions where they spend many of their waking hours, they’ll tell you, are lacking in rigor, relevance, or both.

They aren’t wrong. Studies of American public schools from 1890 to the present suggest that most classrooms lack intellectual challenge. A 2015 Gallup Poll of nearly a million United States students revealed that while 75 percent of fifth-grade students feel engaged by school, only 32 percent of 11th graders feel similarly.

What would it take to transform high schools into more humanizing and intellectually vital places? The answer is right in front of us, if only we knew where to look.

When the two of us — a sociologist and a former English teacher — began our own investigation of this question several years ago, we made two assumptions. Both turned out to be wrong.”

“When I visit a college campus and ask the students what they’re studying, the response often starts with: “I’m double-majoring in … ” And then my heart sinks just a little bit.

I understand why many students are tempted to double-major. They have more than one academic interest. When I was in college, I briefly thought about double-majoring in my two favorite subjects, math and history. (Instead, I spent much of my time at the college newspaper and barely completed one major — applied math.)

But the reality is that many students who double-major aren’t doing it out of intellectual curiosity. The number of double majors has soared in recent years mostly because students see it as a way to add one more credential to their résumé. What’s even better than one major? Two majors!

[Listen to “The Argument” podcast every Thursday morning with Ross Douthat, Michelle Goldberg and David Leonhardt.]

Except that it’s not. Most students would learn more by creatively mastering a single major — and leaving themselves time to take classes in multiple other fields. “Double majoring,” as Jacqueline Sanchez, a Wellesley College student, wrote in a recent op-ed for her campus paper, “ultimately prevents students from exploring many different disciplines.” “

David Lindsay: I strongly agree. I love the motto of a consulting company whose name is not so memorable:  Work hard, play hard.

To that I will add, find what gives you joy, and do some of that. Since the world is often sad and crazy, learn to laugh with humility, when you are not punishing yourself for your imperfections.

“SANTA FE, N.M. — Have I got a college for you. For your first two years, your regimen includes ancient Greek. And I do mean Greek, the language, not Greece, the civilization, though you’ll also hang with Aristotle, Aeschylus, Thucydides and the rest of the gang. There’s no choice in the matter. There’s little choice, period.

Let your collegiate peers elsewhere design their own majors and frolic with Kerouac. For you it’s Kant. You have no major, only “the program,” an exploration of the Western canon that was implemented in 1937 and has barely changed.

It’s intense. Learning astronomy and math, you don’t merely encounter Copernicus’s conclusions. You pore over his actual words. You’re not simply introduced to the theory of relativity. You read “Relativity,” the book that Albert Einstein wrote.”

Great piece and comments too. Here is one of many good comments:

When we were visiting prospective colleges, I bribed my son to visit St. John’s. (I promised lunch in nearby Washington, DC).

Having gone on tours of multiple colleges, we had developed stock questions to ask admissions officers, including “What’s the ideal [Name of College] student?” Most of the responses were stock answers performed in front of a crowd of parents and students.

At St. John’s it was just my son and me sitting across from two Admissions officers for over an hour. (We didn’t even have an appointment.) When I pulled out this stock question, “What would you say is the ideal St. John’s student?” the Admissions officers took her time turning the question over in her mind and thoughtfully replied, “I’d say St. John’s is for the intellectually courageous.”

I watched as my son sat up taller.

We spent two more hours touring the campus with an enthusiastic “Johnny” as our guide. Lunch time came and went. My son was smitten. He fell in love with St. John’s and graduated four years later. His passion for “the program” has never wavered.

Every time I’d visit, he’d take me for his own version of a tour of this magical place, unpacking and relating all he’d learned.

My favorite was standing in front of a series of framed mathematical proofs. His explanations became more expansive and incisive with each visit—from Euclid to Ptolemy to Copernicus to Apollonius to Galileo to Newton to Lobachevski.

The four years passed quickly, but this education is timeless. 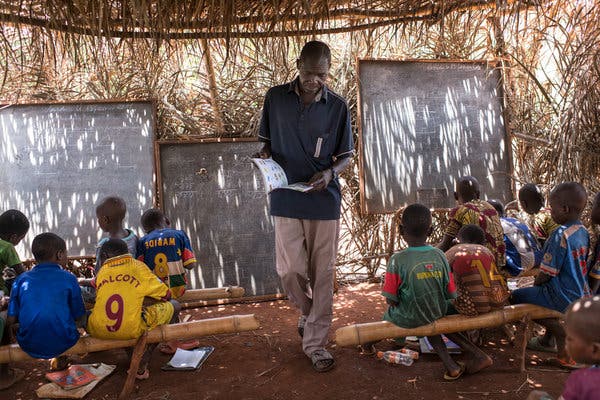 NDONGA, Central African Republic — This remote village doesn’t have an official school, and there’s no functioning government to build one. So the villagers, desperate to improve their children’s lives, used branches and leaves to construct their own dirt-floor schoolhouse.

It has no electricity, windows or desks, and it doesn’t keep out rain or beetles, but it does imbue hope, discipline and dreams. The 90 pupils sitting on bamboo benches could tutor world leaders about the importance of education — even if the kids struggle with the most basic challenges.

“It’s hard to learn without a paper or pen,” Bertrand Golbé, a parent who turned himself into a teacher, acknowledged with a laugh. “But this is the way we have to do it.

“They never have had breakfast when they arrive,” Golbé added. “They’re hungry. It’s difficult.”

David Lindsay:   Lovely op-ed by Nicholas Kristof, but it was short on numbers refered to by not shared.
Kristof wrote;
“And in South Sudan, a girl is more likely to die in childbirth than to graduate from high school.
…..
Education is also a bargain: By my back-of-envelope calculations, for about one-half of 1 percent of global military spending, the world could vanquish illiteracy forever by ensuring that every child completes primary school.”
I wonder why he excludes the numbers. He was over his word count, or thinks we would be burdened?
The numbers matter. It is too bad they are left out.
That said, his thesis right. We should support and help pay for elementary education in the third world, because it its good for humanity and the evironment, and slowing out of control population growth.
David Lindsay Jr. is the author of “The Tay Son Rebellion, Historical Fiction of Eighteenth-century Vietnam,” and blogs at TheTaySonRebellion.com and InconvenientNewsWorldwide.wordpress.com