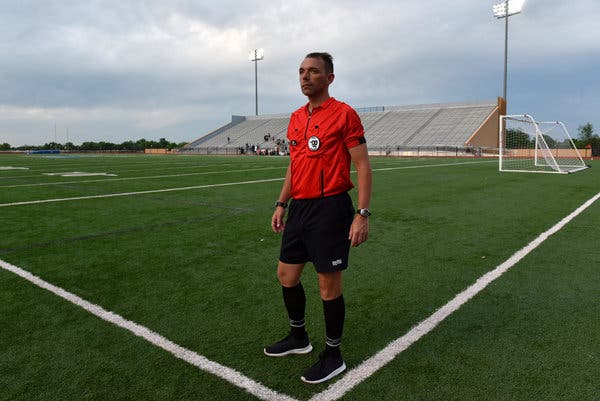 By Bill PenningtonJuly 18, 2018
78 comments
TULSA, Okla. — In one video, a fan at a youth soccer game bellows profanities and violently kicks a ball that slams into a teenage referee standing nearby. She disagreed with a penalty called.

Another captures parents at a youth basketball game charging the court to hurl punches at the referee. And yet another shows parents berating game officials as they walk to their cars after a soccer game. The players were 8-year-olds.

The videos were posted on a Facebook page, Offside, created in frustration by an Oklahoma youth soccer referee, Brian Barlow, who offers a $100 bounty for each clip in order to shame the rising tide of unruly parents and spectators at youth sports events.

“I do it to hold people accountable — to identify and call out the small percentage of parents who nonetheless create a toxic environment at youth sports,” Barlow, 44, said. “It’s a very visual deterrent, and not just to the person caught on video but to others who ask themselves: Do I look like that jerk?” ”

This put a smile on my face. Not the video, but that a referee stood up to ugly parents. And, it is worth noting, not all Facebook stories are bad. Here is Facebook as spectacular public servant.
I coached and sometimes refereed youth soccer for 10 or 11 years. I coached my three kids, Austin, Daniel and Catherine. It was a good run, pun intended. I didn’t see many out of control parents, but bad parent behavior was a regular discussion of our organizational meetings. While coaching U6, (Under Six), or 4 and 5 year olds,
I once with a big smile reprimanded one Dad gentlly, for yelling, “Go Joey, pull his pants down.”
I was tempted to use the same expression myself many times afterwards, but lucking, kept it as just a dinner story.

“Unfortunately — although there are some interesting exceptions and tantalizing hopes for some conditions — ultrasound is not a promising therapy for most of the painful problems it is used for. There is a jarring, bizarre lack of quality research for such a popular, mainstream therapy. What little research is available paints a bland picture. Ultrasound therapy isn’t even on good theoretical foundations. At best, it’s more complicated and unpredictable than most therapists believe. At worst, there is no rational basis for US at all.”

“Ultrasound has been used as a treatment modality for sports injuries by therapists over the last 50 years.How does ultrasound work?Ultrasonic waves or sound waves of a high frequency that is not audible to the human ear are produced by means of mechanical vibration in the metal treatment head of the ultrasound machine. The treatment head is then moved over the surface of the skin in the region of the injury transmitting the energy into the tissues.

When sound waves come into contact with air it causes a dissipation of the waves, and so a special ultrasound gel is placed on the skin to ensure maximal contact between the treatment head and the surface of the skin and to provide a medium through with the sound waves can travel. Ultrasound can also be applied under water which is also a medium for ultrasound waves to travel through.”