“For nearly 60 years, Justus Rosenberg was a beloved literature professor at Bard College. Clad in his familiar tweed jacket, he taught French, German and Russian classics and was known for popular courses like “10 Plays That Shook the World.”

As a teenager in World War II, he served as a courier in the fabled rescue team of Varian Fry, an American journalist who launched a covert operation that provided safe passage to artists and intellectuals out of Vichy France. The mission aided luminaries like Hannah Arendt, Marcel Duchamp, Marc Chagall, Max Ernst and André Breton.

Mr. Rosenberg then fought in the French Resistance, lobbing grenades at German tanks, and aided the U.S. Army as a reconnaissance scout, earning a Bronze Star. He also received the Purple Heart: a jeep in which he was riding hit a land mine, badly wounding him and killing the soldier who had taken his usual seat.”

“At the worst possible time, when the United States is at its most vulnerable — during a presidential transition and a devastating public health crisis — the networks of the federal government and much of corporate America are compromised by a foreign nation. We need to understand the scale and significance of what is happening.

Last week, the cybersecurity firm FireEye said it had been hacked and that its clients, which include the United States government, had been placed at risk. This week, we learned that SolarWinds, a publicly traded company that provides software to tens of thousands of government and corporate customers, was also hacked.

The attackers gained access to SolarWinds software before updates of that software were made available to its customers. Unsuspecting customers then downloaded a corrupted version of the software, which included a hidden back door that gave hackers access to the victim’s network.”

“Put yourself in the shoes of Russian or Iranian leadership for a moment. Why not interfere with the voting in the U.S. presidential election? What could be more advantageous than catalyzing a bitter and protracted battle over the results of the election, with a chance of igniting civil unrest throughout the country? Sure, it might not work — but with little to lose and so much to gain, why not try?

When it comes to foreign election meddling in elections, disinformation is a serious threat, but the most disruptive form of intrusion is electoral cyber-interference: the freezing of voting systems, the mass deletion of voter registration information, altering vote counts and so on. Such feats may not be easily accomplished, but if they were successful, they could throw the United States into chaos.

The risk is not hypothetical. American intelligence agencies, having hacked into Russian computer networks, report that Russia recently infiltrated some voting systems in the United States. If Russia or another country were to alter tallies or voter information in just a few swing states, it could threaten our confidence in the results of the election.

That is why this week, Joe Biden and President Trump should threaten punishing retaliation should another nation attempt such forms of electoral interference. They should stress that by “interference” they do not mean propaganda or influence campaigns, but rather direct attacks on the election, which are attacks on political independence and thus a form of illegal aggression. And they should warn that such attacks will lead to destructive consequences — as permitted by international law — for the offending nation and its leadership.”

463
WASHINGTON — A new American intelligence assessment of global threats has concluded that North Korea is “unlikely to give up” all of its nuclear stockpiles, and that Iran is not “currently undertaking the key nuclear weapons-development activity” needed to make a bomb, directly contradicting two top tenets of President Trump’s foreign policy.

Daniel R. Coats, the director of national intelligence, also challenged Mr. Trump’s insistence that the Islamic State had been defeated, a key rationale for his decision to exit from Syria. The terror group, the annual “Worldwide Threat Assessment” report to Congress concluded, “still commands thousands of fighters in Iraq and Syria,” and maintain eight branches and a dozen networks around the world.

By Adam B. Ellick, Adam Westbrook and Jonah M. Kessel

This is an excellent video piece about the KGB’s Disinformation work in the 1980’s.

It is unfortunate that the jounalists badly overreach, in suggesting that the KGB invented Fake News in the Cold War. Fake News, or disinformation and propaganda,  was referenced and esteemed in The Art of War by SunTsu over a  thousand years ago.

“I like to say that leadership is a choice. As our leaders in Washington confront tough decisions about our budget priorities, I urge them to continue federal funding for public broadcasting. Public broadcasting makes our nation smarter, stronger and, yes, safer. It’s a small public investment that pays huge dividends for Americans. And it shouldn’t be pitted against spending more on improving our military. That’s a false choice.”

This is the source of the link to Scribd.com, which has the document available to download for a fee.

“The Pentagon is integrating climate change threats into all of its “plans, operations, and training” across the entire Defense Department, signaling a comprehensive attempt to tackle the impacts of global warming.In a 20-page report released on Monday, the Pentagon details its strategic blueprint to address climate change, calling it a “threat multiplier” that has the power to “exacerbate” many of the challenges the U.S. faces today, including “infectious diseases and terrorism.”Read DOD report: 2014 Climate Change Adaptation Roadmap”

This is the document I found reference to, the link of which, at the DoD, has died. The Government sites no longer seem to have this document available.

“Department of Defense FY 2014 Climate Change Adaptation RoadmapClimate change will affect the Department of Defense’s ability to defend the Nation and poses immediate risks to U.S. national security. The Department is responding to climate change in two ways: adaptation, or efforts to plan for the changes that are occurring or expected to occur; and mitigation, or efforts that reduce greenhouse gas emissions. This Climate Change Adaptation Roadmap (Roadmap) focuses on the Department’s climate change adaptation activities1. The Strategic Sustainability Performance Plan (SSPP) articulates the Department’s sustainability vision to maintain our ability to operate into the future without decline in the mission or the supporting natural and man-made systems. The actions set forth in this Roadmap will increase the Department’s resilience to the impacts of climate change, which is a key part of fulfilling this vision.” 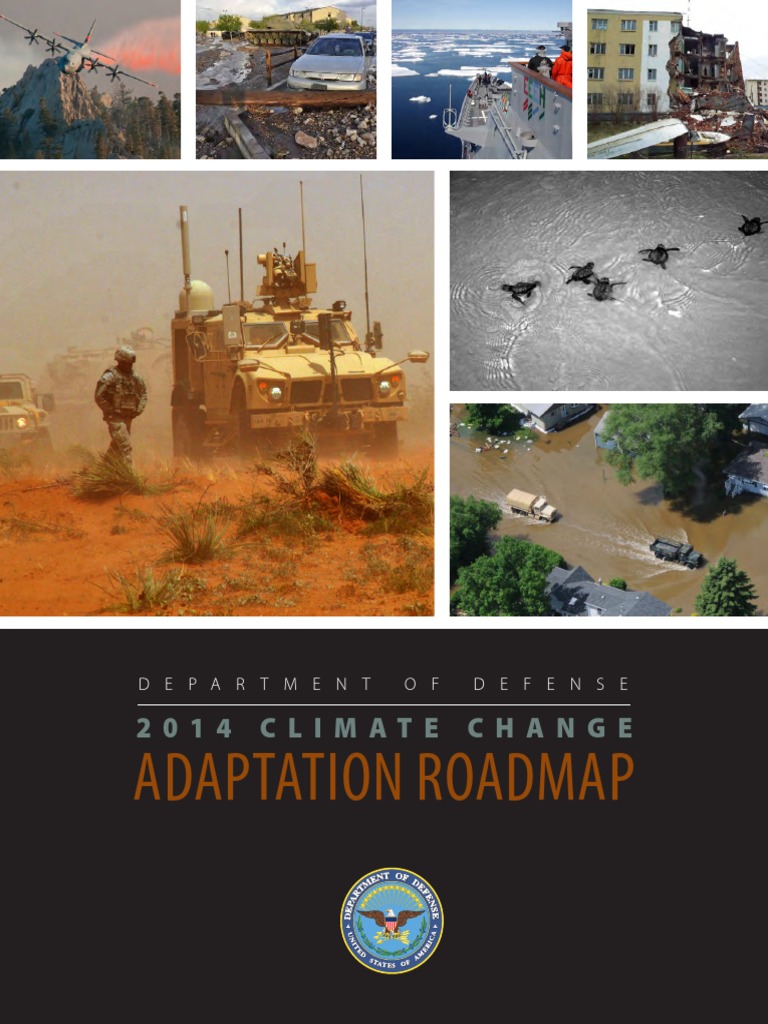 “While the Trump administration is proposing significantly increased military spending to enhance our national security, it seems to have lost sight of the greatest national security threat of all: our fight against infectious disease.

We already spend far more on our military than any other country in the world. To help pay for the increases, President Trump wants to cut back many federal programs, including those that prepare us to wage war against microbes, the greatest and most lethal enemy we are ever likely to face. This is where “defense spending” needs to increase, significantly.

President Trump’s budget would cut funding for the National Institutes of Health by 18 percent. It would cut the State Department and the United States Agency for International Development, a key vehicle for preventing and responding to outbreaks before they reach our shores, by 28 percent. And the repeal of the Affordable Care Act would kill the billion-dollar Prevention and Public Health Fund, which provides funding for the Centers for Disease Control and Prevention to fight outbreaks of infectious disease. (While the budget also calls for the creation of an emergency fund to respond to outbreaks, there is no indication that it would offset the other cuts, or where the money would come from.)”

The author mentions Zika and Ebola as examples of diseases that are new to the U.S. Everything the authors have written is certainly true. What is not mentioned is that climate change is also a factor that needs to be recognized. In addition to influenza and bacterial diseases, a greater diversity of tick borne diseases have been found in the Northeast possibly due to shorter winters. We have recognized Lyme disease for decades, but more recently when symptoms warrant, doctors are also screening for a larger number of diseases associated with tick vectors. Some of these diseases are quite serious if not diagnosed and treated.

Flooding and drought can impact disease in areas where temperatures are rising. Air quality may be impacted as temperatures rise changing the incidence of respiratory illnesses. This information can be found on the CDC’s website at:

The Trump budget slashes the budget for the EPA and much government funded scientific research. Cutting funding for the NIH is indeed irresponsible, but without adequate funding for climate science, we will be unable to study how our climate is being impacted and to determine how to prepare and ideally moderate the consequences. The NIH, the EPA and the CDC are all a part of our country’s defense along with the military, CIA, and Homeland Security.