Video trip through the largest refugee camp in the world.

The Rohingya in Bangladesh prepare for the coming monsoon rains.

About this article
NYTIMES.COM
Race Against the Rains
The race to rebuild the world’s largest refugee camp, where monsoon rains threaten flooding, landslides and disease.

Source: Race Against the Rains – The New York Times

How the Rohingya Escaped – The New York Times.html

The world’s largest refugee camp, a temporary home to more than half a million people that sprawls precariously across barren hills in southeastern Bangladesh, faces a looming disaster as early as April when the first storms of the monsoon season hit, aid workers warn. “It’s going to be landslides, flash floods, inundation,” said Tommy Thompson, chief of emergency support and response for the World Food Program. “It’s going to be a very, very challenging wet season. That’s if we don’t have a cyclone.” 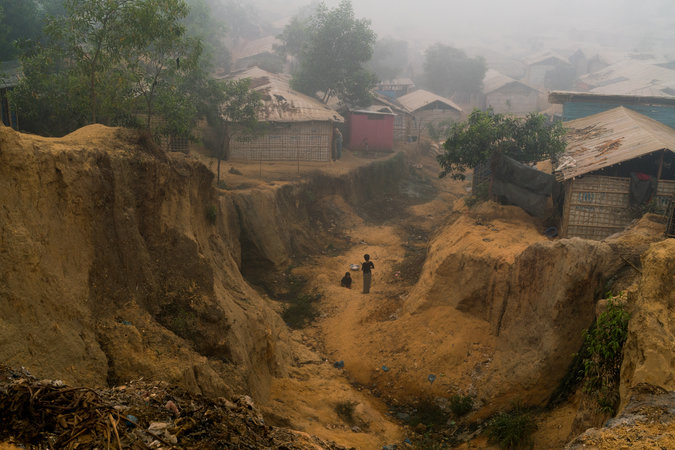 “But then, in a matter of weeks, as refugees poured in by the tens of thousands, trees were hacked away. Canals were dug. Bamboo-and-tarp shacks went up. More trees were cut as refugees scrambled to find firewood.

The hills, where elephants recently roamed, are now bare. Even the roots have been pulled out, leaving nothing to hold the parched soil together as rainwater washes downhill, potentially taking tents and people with it and quickly inundating low-lying settlements. The United Nations says 100,000 refugees are at acute risk from landslides and floods.

The early rains — known in Bengali as kalboishakhi, which translates loosely as the storms of an “evil summer” — are a precursor to the full-on monsoons. They strike when the soil is still dry and especially susceptible to mudslides. The only warning of their approach is usually hot winds that send the dry earth of summer swirling through the air.”

Source: The Biggest Refugee Camp Braces for Rain: ‘This Is Going to Be a Catastrophe’ – The New York Times

DL: It is too bad that these 600,000 Rohingya refugees were forced or allowed to deforest the area they were placed in. Now they have turned that piece of dessert into a probable death camp when the monsoon rains appear. I need firewood now, versus, I need these trees to prevent flooding later, is a choice I  hope that I never have to make.