“A quarter-century ago I was walking across Spain on the Camino de Santiago, the ancient pilgrim route. Two weeks into my 500-mile hike I was anxious, lonely and miserable. Each day was worse than the one before. I felt like a failure and a weakling.

One afternoon while walking through a parched field of cut wheat in the high plateau under blistering sun, I dropped to my knees and began to sob. My tears had caught me unaware and were unstoppable. I cursed whatever God I half believed in and demanded answers for why I felt so alone, so frail, so incomplete. I cried myself out, got to my feet and trudged on, six hours to the next village. I found a bed and fell into dreamless sleep.

The next morning I was back on the trail. Shuffling along, I couldn’t shake the feeling I had forgotten something. I stopped and checked my pack. Twice. Nothing was out of place or missing. An hour later I was taking a break beside a barn, snacking on a wedge of cheese and a hunk of stale bread. As I went to hoist my pack and soldier on, I became aware of hearing birds call, distinct and clear. I noticed how crisp the colors around me appeared, the burnt umber of the earth, the high red of a nearby tractor. The few puffy clouds overhead appeared to morph and shift in a way that felt almost preordained. The sensation was one of being wide-awake. Then it dawned on me — what I had “forgotten,” what I didn’t have, what I was missing. It was fear.”

“To cruise or not to cruise? To safari or stay put? To fly — perchance to hang glide or kite surf into some un-Instagrammed country. So goes the great moral dilemma now lurking in the travel and tourism industry, perhaps the beating heart of global consumerist extravagance. Now that our year-plus fast is close to over, shall we commence gorging once more?

In 2019, according to an industry trade group, the world spent about $9 trillion — nearly a tenth of global G.D.P. — on tourism. It was the 10th consecutive year of growth in travel, and expansion looked endless.”

By Jamie Lauren KeilesJan. 5, 2021, 5:00 a.m. ETListen to This ArticleAudio Recording by AudmListen 49:48To hear more audio stories from publishers like The New York Times, download Audm for iPhone or Android.They came to Dubrovnik by cruise ship or Ryanair — members of a new hypermobile class of tourist, who traveled for cheap and didn’t stay long. They’d seen its walled Old Town on “Game of Thrones,” and they wanted to be there themselves, so they went. Venice, Barcelona, certain beaches in Thailand — these places had all faced their own “overtouristing” problems, but even by this standard, Dubrovnik was extreme. On busy days, tourists could outnumber permanent Old Town residents about 6 to 1. With a main thoroughfare less than a thousand feet long, this pressure on the city’s charm was overwhelming. By 2017, tourism had so overburdened the Old Town that UNESCO was threatening to revoke its World Heritage status. Mayor Mato Frankovic set out to save his city by sabotage, capping passage through the gates at 4,000 daily visitors and functionally banning new restaurants. Nevertheless, the tourists kept coming.But then, around March 2020, they stopped. After the Diamond Princess debacle, no more cruise ships appeared in the port. Airplanes were grounded, then took flight again — ending an age of quick and easy travel and ushering in a new, slower one. Pandemic travel was arduous and impeded by knotty, sometimes contradictory governmental guidelines. To travel under these conditions required an unhinged urge to take flight and a bureaucrat’s eye for parsing fine print. Brian Kelly, the founder of a website called The Points Guy, had both — plus a few million unused frequent-flier miles. This was how, on Saturday, Aug. 7, he found himself heading from New York to Dubrovnik, to see the walled city with nobody there.

I am 78 and my wife is 76; we’re both in good health. We are planning to drive from Chicago to Santa Monica before Thanksgiving. We are concerned about how to handle hotels, meals, bathrooms and gas stops during the pandemic. How can we stay safe? Paul

Travel is complicated right now, and tasks that seemed simple a year ago — like checking into a hotel or gassing up — suddenly feel like a huge lift. Americans are expected to take nearly 700 million trips by car this summer, and I have no doubt that many of them share some of your uncertainty.

To help answer your road trip questions, I spoke to two public health experts: Sandra Albrecht, an assistant professor of epidemiology at Columbia’s Mailman School of Public Health, and Sarah Fortune, the chair of the Department of Immunology and Infectious Diseases at Harvard’s T.H. Chan School of Public Health. Dr. Fortune just finished a round-trip drive from Boston to New Orleans.

The first tip both of these experts offered? Accepting the fact that there is some risk in everything right now.

“When Chris Voss showed up at his hotel in Los Angeles recently before the official check-in time, the clerk informed him there would be an early check-in fee. Minutes later, he left the reception desk with the fee waived and a key to an upgraded room.

A former lead international kidnapping negotiator for the F.B.I., Mr. Voss is an expert in negotiation, and not just at hotels. He successfully negotiated the surrender of hostages during the 1993 Chase Manhattan bank robbery in Brooklyn. He has taught business negotiation at Harvard University and written about the art of persuasion in his book, “Never Split the Difference.” His new online MasterClass details the use of body language, speech patterns, empathy and bargaining — tactics he believes can be applied, from requesting a pay raise to landing travel perks and avoiding travel penalties.

The following interview, on Mr. Voss’s approach to managing travel hurdles, has been edited and condensed for clarity.

Are there basics to negotiation, like controlling your voice?

It’s great there are so many demanding travelers who raise their voices. It makes it easier for the rest of us. Start out friendly and playful. The idea is to convey “I like you and want you to enjoy this interaction.” It will come out in your voice and impact them positively before you finish your first sentence. The adage is: Never be mean to someone who can hurt you by doing nothing. If you’re good, they’ll be delighted to do for you whatever they can. A playful, enjoyable attitude gives you latitude.”

1. The bigger your suitcase, the more you will put into it: The simplest way to avoid bringing too many things is to buy a hard-sided suitcase, no more than 22 inches tall (so it can work as a carry-on) with a structured shell so you can’t squeeze in any extras.

2. Do the clothing countdown: If you need a mantra to help streamline your wardrobe, use the 5, 4, 3, 2, 1 rule for a weeklong trip: Limit yourself to no more than five sets of socks and underwear, four tops, three bottoms, two pairs of shoes and one hat. The list should be adjusted to suit your needs. Throw in a swimsuit and exercise gear or a suit jacket and dress if you’ll need them.

3. Lay out what you think you’ll need, then edit ruthlessly: “Think twice about everything you want to put in your bag,” said Ben Nickel-D’Andrea, who writes about flying first-class with his husband, Jon Nickel-D’Andrea, at No Mas Coach!, part of the BoardingArea blogger network. The jet-setting couple once flew to Morocco for nine days with only carry-on bags and backpacks. “Fully get rid of the ‘just in case I need it’ category,” he said. “If and when you need it, you can buy it.”

By Wirecutter Staff
Jan. 5, 2019, 44 comments
“With baggage fees and flight delays on the rise, carry-on travel has become more survival tactic than lifestyle choice. Beyond saving money, flying with only a carry-on prevents bags from getting lost in handling, and gives you more flexibility in case of cancellation, as planes are frequently grounded by weather that poses no threat to a train, bus, or car.

Packing a whole trip’s worth into a small bag is often a challenge, but it gets easier with the right accessories. Here are a few suggestions to help. 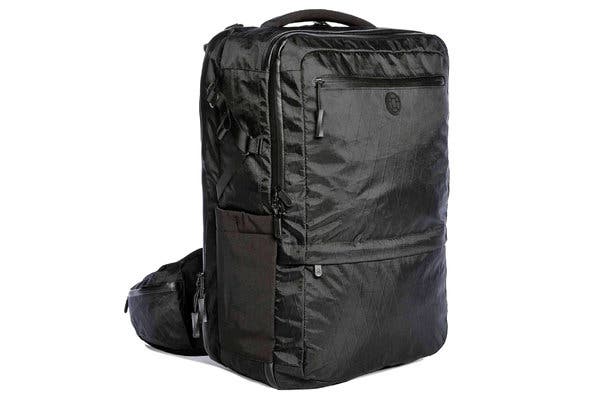 Her 19-year-old son told her that his Airbnb host in Madrid had locked him in the fourth-floor apartment where he was supposed to be staying and removed the key. The host was still there, he said, rattling knives around in the kitchen drawer and pressing him to submit to a sexual act. He begged his mother for help.

When she called Airbnb, its employees would not give her the address and would not call the police. Instead, they gave her a number for the Madrid police and told her to ask the police to call the company for the address. But the number led to a recording in Spanish that kept disconnecting her, she said, and when she repeatedly called back her Airbnb contact, the calls went straight to voice mail.

via Airbnb Horror Story Points to Need for Precautions – The New York Times.

Luckily, I sort of knew most of this. AT&T does not cover the world. No balkan countries at all. Rates jump to $2.50/minutes for phone, and $20 per megabyte of data. I worried, when in a good wifi hotspot in Bosnia, whether my phone would always automatically use the wifi over the usurious cell phone connection. A few wonderful Wifi places, like Le Flash Cafe, Rue Barbes 18th, Paris, insisted on a 24 digit password with mixed numbers and upper and lower case njumbers. It took three people four tries to type it all correctly. I wondered if such intense and awkward security was necessary for a wifi connection in Paris or any other city?

How Not to Pay the Price for Free Wi-Fi
Jumping on a network at a coffee shop or park could put your privacy at risk. Here are some ways to stay (reasonably) safe.
nytimes.com|By Stephanie Rosenbloom