Mr. Kizzia was a reporter for The Anchorage Daily News for 25 years. He is the author of several books about Alaska, most recently, the ghost-town history “Cold Mountain Path.”

“Glacier Bay National Park and Preserve is one of those Alaska showpieces more often seen by visitors than by the state’s residents. When I finally got there this summer, after more than 40 years living in Alaska, I arrived the way most people do, on board a cruise ship, in the company of a few thousand tourists from around the world.

The remote park’s lofty summits and ice-carved fjords, the humpbacks and orcas and grizzlies lived up to what I’d heard. As passengers spilled onto the upper observation deck, agog, the ship’s theatrical pirouette before a wall of blue glacial ice showed off Romantic nature in all its timeless glory.

Something was amiss, though, at least for me. I was along for the trip as an invited local speaker — Alaska author and freelance wilderness rhapsodist. But during my decades in Alaska, I had seen too many changes, interviewed too many climate scientists, read (well, skimmed) too many studies. I gazed from the railing with a contemporary Alaskan’s gloom, a pilgrim bearing witness to end-times in the temple of the glaciers.

I started asking around to see if anybody else felt this way.

The park rangers told me that glacier tourism was indeed changing. On these cruise ships, the disappearance of coffee to-go cups from the breakfast service is one of the first signs you have sailed into a national park. It’s part of your ship’s concession contract: no latte cups flying into pristine waters. The casino games shut down, and uniformed rangers are brought aboard to mingle and give talks about the environment.”

“You can read and listen to all of the advice — it helps prepare you mentally, but at the same time I’m thinking, ‘Oh, that is a bear in front of me, looking at me,’” Mr. Fitz said. “What am I going to do now?”

This particular bear, on top of Dumpling Mountain in Katmai National Park in Alaska, however, was not exactly an imminent threat. The bear was about a quarter-mile away from Mr. Fitz, and his yells across the vast landscape barely made a dent. “I hadn’t figured out that making noise is appropriate in certain situations,” he said. “The bear probably heard me and thought, ‘What is this two-legged creature doing?’”

The encounter proved to be a formative moment for Mr. Fitz, and for millions of bear fans around the world. Mr. Fitz is the founder of Fat Bear Week, now in its ninth year. What began as a way for Mr. Fitz, a former park ranger, to engage with visitors to Katmai has “spiraled.” “

“By Alaskan standards, the gravel road that an isolated community near the Aleutian Islands wants to build to connect to an airport is not a huge project. But because it would be cut through a federal wildlife refuge, the road has been a simmering source of contention since it was first proposed decades ago.

Now, the dispute is boiling over. And none other than former President Jimmy Carter, 97, has weighed in.

Residents of King Cove, and political leaders in the state, who argue that the road is needed to ensure that villagers can get emergency medical care, see the potential for a long-sought victory in a recent federal appeals court ruling that upheld a Trump-era land deal that would allow the project to move forward.

Conservation groups, who say the project is less about health care and more about transporting salmon and workers for the large cannery in King Cove, fear that more is at risk than just the Izembek National Wildlife Refuge, 300,000 acres of unique habitat for migratory waterfowl, bears and other animals.”

“Secluded in the far-flung Gates of the Arctic National Park in northwestern Alaska, the flooded Noatak River pushed our raft downstream into a brisk wind. Caribou trails spider-webbed the hillsides, while cumulus clouds gathered like ripened fruit above a valley so vast that you could feel lost without binoculars and frequent map consultations.

To avoid crashing into the banks, I had to keep sharp eyes on the surging river and hands on the oars. Since extreme rainfall had lifted the river out of its banks (and delayed our floatplane flight in from Bettles, Alaska, for three days), every potential campsite had been sluiced over with silt and left soaking wet.

Thirty-six years had passed since I had last worked as a guide on the Noatak River. This year, instead of simply enjoying a float down memory lane in the wildest country imaginable, I was stunned by how climate change had radically altered the place I once knew.

Drawn to wild places all my life for spiritual renewal, I had chosen the Noatak as the ultimate wilderness trip to share with my 15-year-old son, Alistair, and another family. I had also come to escape the record heat and forest fire smoke in Colorado for what I believed would be a cool interlude in the Far North.”

“WASHINGTON — A federal judge in Alaska on Wednesday blocked construction permits for an expansive oil drilling project on the state’s North Slope that was designed to produce more than 100,000 barrels of oil a day for the next 30 years.

The multibillion-dollar plan, known as Willow, by the oil giant ConocoPhillips had been approved by the Trump administration and legally backed by the Biden administration. Environmental groups sued, arguing that the federal government had failed to take into account the effects that drilling would have on wildlife and that the burning of the oil would have on global warming.

A federal judge has agreed.

In her opinion, Judge Sharon L. Gleason of the United States District Court for Alaska wrote that when the Trump administration permitted the project, the Interior Department’s Bureau of Land Management’s exclusion of greenhouse gas emissions in its analysis of the environmental effects of the project was “arbitrary and capricious.””

“FAIRBANKS, Alaska — The Arctic National Wildlife Refuge is one of the most pristine landscapes in the United States. But that may soon change as the Trump administration seeks to exploit an untapped trove of oil beneath its coastal plain.

Since Congress approved a measure last December to open the coastal plain to oil exploration, the Department of the Interior has been charging ahead with a plan to sell drilling leases as early as next year. Trucks weighing 90,000 pounds could begin rolling across the tundra even before then to conduct seismic tests that help pinpoint oil reserves.

The hurried approach has alarmed some government specialists and environmentalists, who say that risks to wildlife and damage to the tundra are not being taken seriously enough. And it comes as the Trump administration moves more broadly to exploit fossil fuels in Alaska and beyond, erasing restrictive policies that were designed to protect the environment and address global warming.

The New York Times examined how, in the space of about a year, the refuge’s coastal plain — known as the 1002 Area — went from off-limits to open for business. Here are six takeaways.”

Andrew Derocher is a biologist at the University of Alberta who has researched polar bears for more than three decades. He is also a volunteer adviser to Polar Bears International, a conservation group.

He discussed the status of polar bears in the Arctic amid a warming climate, and the potential impact of oil and gas exploration. The interview has been edited for length and clarity.

Q. Worldwide in the Arctic, there are roughly 25,000 polar bears in what scientists consider to be 19 subpopulations. Over all, how are they doing?

A. People assume that because we’re concerned about polar bears from a conservation and management perspective, that all polar bears must be doing terribly. That’s not the case. Polar bears are doing just fine in many parts of their distribution, and with 19 different populations around the Arctic, we have 19 different scenarios playing out.

What do scientists know about the impact of oil and gas exploration and production on polar bears?

One of the things that’s pretty cool about bears in general and polar bears in particular is each bear has an individual behavior pattern, or personality, if you want to call it that. Some bears just don’t seem to care — they are just not worried by people, not worried by snow machines or all-terrain vehicles or trucks going by. Yet others are extremely wary, don’t like it and will move away quickly from disturbance.

By and large, I think polar bears are fairly robust to disturbance, but once they have small cubs they tend to be quite timid.

One of the concerns we have is den abandonment. If you harass a bear around a den, there’s a greater likelihood that she will leave it with her cubs. And that is not a good thing. Young cubs are not that well developed and rely on the dens for protection. Moving them around is never a good idea.

We have to accept at least the basic premise that disturbance is not going to be beneficial for the bears. Then the question is, just how bad is it going to be? That’s difficult to say. But anything that adds on to the current impacts of sea ice loss is not going to be good for the population.”

Henry Fountain covers climate change, with a focus on the innovations that will be needed to overcome it. He is the author of “The Great Quake,” a book about the 1964 Alaskan earthquake. @henryfountain 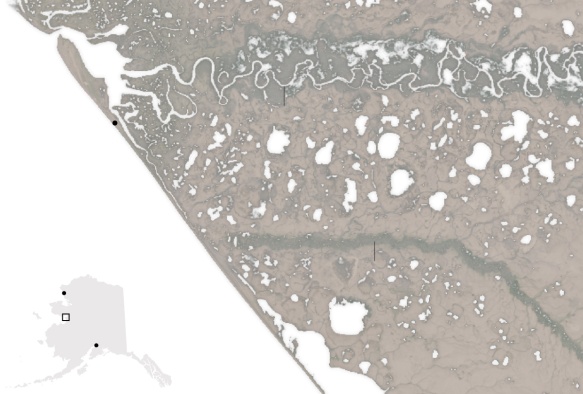 Text by ERICA GOODE Photographs and video by JOSH HANE

“…..Laid out on a narrow spit of sand between the Tagoomenik River and the Bering Sea, the village of 250 or so people is facing an imminent threat from increased flooding and erosion, signs of a changing climate.

With its proximity to the Arctic, Alaska is warming about twice as fast as the rest of the United States and the state is heading for the warmest year on record. The government has identified at least 31 Alaskan towns and cities at imminent risk of destruction, with Shaktoolik ranking among the top four. Some villages, climate change experts predict, will be uninhabitable by 2050, their residents joining a flow of climate refugees around the globe, in Bolivia, China, Niger and other countries.”

Source: A Wrenching Choice for Alaska Towns in the Path of Climate Change – The New York Times