“In the search for ­­­­­a big-city refuge from climate change, Chicago looks like an excellent option. At least, it does on a map.

It stands a half-continent away from the threat of surging ocean levels. Its northern locale has protected it, to some extent, from southern heat waves. And droughts that threaten crops, forests and water supplies in so many places? Chicago hugs the shore of one of the grandest expanses of freshwater in the world.

Water is, in fact, why Chicago exists. The nation’s third-largest city grew from a remarkable geographical quirk, a small, swampy dip in a continental divide that separates two vast watersheds: the Great Lakes and the Mississippi River Basin­­. In the 19th century, Chicagoans dug a canal linking those two watersheds, transforming their muddy town into a metropolis of commerce by making the riches of the American Midwest accessible to the world.”

“. . . But even as a metropolis rose from the mud, the flat landscape never went away. Storm and wastewater drainage in the young city was next to impossible, leaving streets smothered in a septic goo. In wet seasons, the quagmire was so deep it prompted signs along downtown streets issuing an ominous warning: “No bottom.”

“It was woe to the unlucky teamster who chanced to disregard the warning,” the Chicago Tribune wrote in 1859, “for generally his horse had to be dragged out by the neck.”

Chicago couldn’t fix this problem the way other cities did, by laying sloped sewers. The land was so low, it was impossible to place sewers below the streets and still have enough tilt to carry wastewater into the Chicago River. 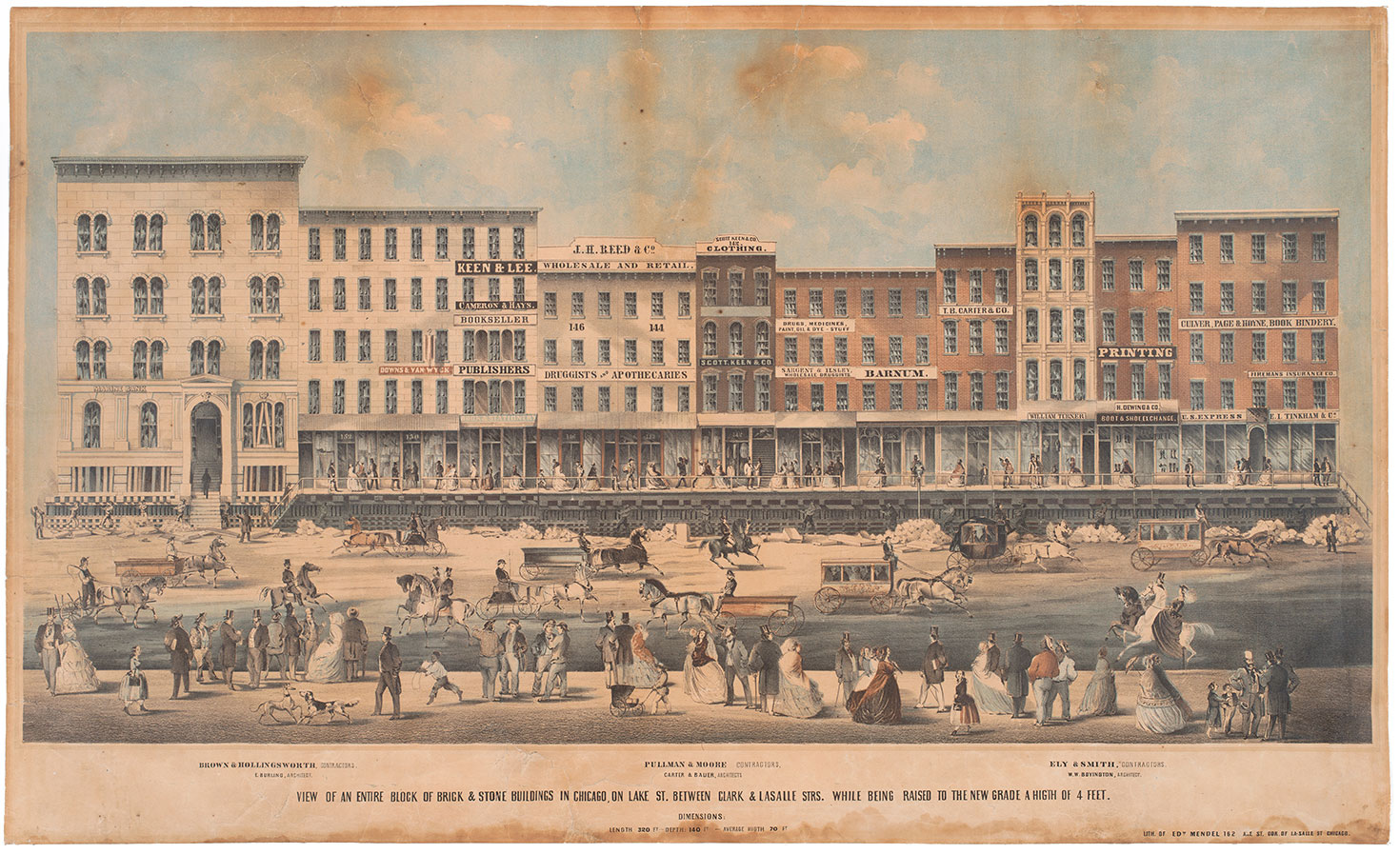 So, Chicago’s leaders got creative. Instead of putting sewers under the streets, they put sewers on top of the streets, then built new roads atop the old ones. They effectively hoisted the city out of the swamp.

Buildings in downtown were raised by as much as eight feet, an enterprise that required placing immense beams and jackscrews beneath their foundations. Then, a conductor would direct hundreds of laborers in the precisely choreographed turns of the screws to lift the structures out of the muck.

“The superintendent takes his stand,” the Chicago Tribune wrote at the time, and with a “shrill whistle” directs the crew to begin. “He continues his whistle long enough for every man to turn each screw one complete round of the thread. Thus the building is raised at every point precisely at the same moment.”

It was a feat of engineering as audacious as it was ultimately ineffective at solving Chicago’s predicament. ‘  . . .