By Leigh Elston
Ms. Elston writes about the energy industry in sub-Saharan Africa. 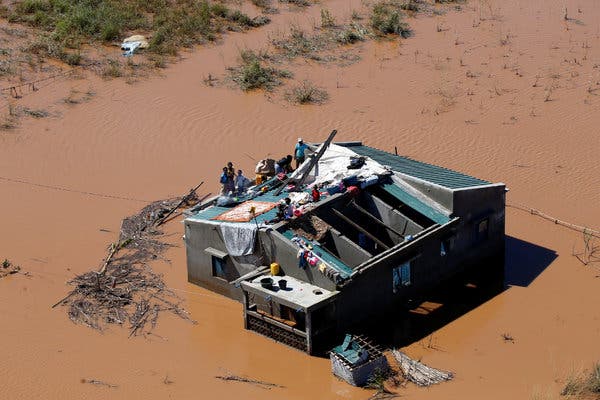 A A A family stranded after Cyclone Ida in the Buzi District of Mozambique last Thursday.CreditCreditSiphiwe Sibeko/Reuters
“MAPUTO, Mozambique — On Tuesday evening, five days after Cyclone Idai hit central Mozambique and the rains started, thousands of survivors were still stranded, waiting to be rescued from trees or the roofs of houses.

On that same evening, far from the floods, I was in an air-conditioned office here in the capital with a group of bankers and oil industry executives, hearing about how rich and happy Mozambicans would soon be. Standard Bank was presenting a new report on the billions of dollars it predicted the Mozambique government will earn from the giant natural gas projects the American oil companies Exxon Mobil and Anadarko plan to start building in the northernmost province of Cabo Delgado this year.

We observed a minute of silence for the victims of the flood. What was not observed was the possibility that climate change, driven by the oil and gas industry, had any responsibility for the natural disaster.

If the Standard Bank report is right, Mozambique will earn $80 billion to $100 billion over the next 30 years from Exxon’s project alone. Anadarko’s project is estimated to deliver $67 billion. Those are huge sums in a country whose gross domestic product is estimated to be around $14 billion.

With that kind of money, the government could hire around 850 doctors and 17,600 teachers, build 3,200 low-cost homes and provide 4,000 hospital beds, the bank estimates.

It could rebuild Beira, Mozambique’s fourth-largest city, 90 percent of which is estimated to have been damaged or destroyed by Cyclone Idai, and the town of Buzi, home to 200,000 inhabitants, which is totally submerged.

It could also fund a proper climate risk management and resilience program, which would be able to provide better warning of disasters, giving people time to evacuate, and improve rescue and relief efforts. It could finance the building of houses, schools, hospitals and roads better able to withstand storms and flooding.

This should be a priority. Mozambique ranks third in Africa as the most exposed to weather-related hazards, including cyclones, droughts and floods — the number and intensity of which are likely to increase.”

Thank you Leigh Elston for this tragic and disturbing story. It breaks my heart, because, I sense deeply, that it is beyond my powers to help the poor and middle class of Mozambique, or to stop the government from stealing the wealth of the country, while contributing to the ruin of the planet’s environments.