“BASILAN, the Philippines — Across the islands of the southern Philippines, the black flag of the Islamic State is flying over what the group considers its East Asia province.

Men in the jungle, two oceans away from the arid birthplace of the Islamic State, are taking the terrorist brand name into new battles.

As worshipers gathered in January for Sunday Mass at a Catholic cathedral, two bombs ripped through the church compound, killing 23 people. The Islamic State claimed a pair of its suicide bombers had caused the carnage.

An illustration circulated days later on Islamic State chat groups, showing President Rodrigo Duterte of the Philippines kneeling on a pile of skulls and a militant standing over him with a dagger. The caption on the picture sounded a warning: “The fighting has just begun.” “

DL: I heard a report on NPR today, 6/13/19, on the devastation of Marawi, which is mentioned further in this news story. 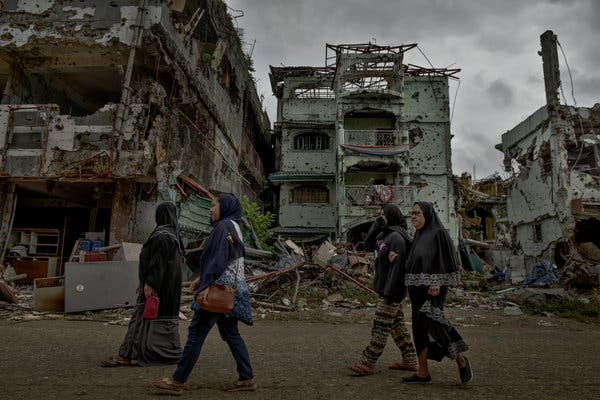 Marawi, after ISIS take over, and then battle to drive them out.

MANILA — The drug raid ended like so many others in the Philippines, with all the suspects shot by the police.But one of them, Efren Morillo, a 28-year-old fruit and vegetable vendor, did not die.As the only known survivor of a so-called buy-bust operation, Mr. Morillo has provided a chilling first-person account that challenges the government’s assertion that the thousands of suspects killed in President Rodrigo Duterte’s antidrug campaign were killed by the police in self-defense. And his testimony lies at the heart of the first court case to challenge that campaign.According to his sworn affidavit, none of the five suspects were drug users and none were armed.The police took two of them, including Mr. Morillo, inside a house, handcuffed, Mr. Morillo said. Three others were lined up at a clearing near a ravine, ordered to kneel, their hands tied behind their backs.There was begging and crying as the police shot each man at close range, Mr. Morillo said.

“TOKYO — President Rodrigo Duterte of the Philippines, on a trip to Japan, said Wednesday that he wanted all foreign troops out of his country within “maybe two years” and that he was willing to revoke base-hosting agreements with the United States.The remarks, made to a group of Japanese and Filipino businessmen in Tokyo, are the clearest signal yet that Mr. Duterte wants to renegotiate the 2014 agreement his predecessor reached with the United States to let the Pentagon use five Philippine military bases, a central component of the Obama administration’s plan to bolster American influence in Asia.

“I want them out,” Mr. Duterte said of the American troops in his country, adding that he was willing to “revise or abrogate agreements.” He also repeated a recent assertion that he would withdraw from any joint military exercises with the United States, a treaty ally. “This will be the last maneuver, war games, between the United States and the Philippine military,” he said, according to a transcript of his remarks.

Mr. Duterte’s trip to Japan is his first state visit since he said in China last week that he wanted a “separation” from the United States, a remark he later softened. He told his Tokyo audience on Wednesday that he had discussed only economic matters with Chinese officials, not security or alliances.

Still, his visit puts Japan, another important ally of the United States in Asia and the Philippines’ largest trading partner, in the delicate position of trying to retain a balance in an increasingly tense region where Japan fears any further tilt toward China.Mr. Duterte was more subdued in a joint statement with Prime Minister Shinzo Abe later on Wednesday. Calling Japan a “special friend who is closer than a brother,” he said the Philippines would continue to work closely with Tokyo and uphold democracy and the rule of law in a peaceful settlement of disputes in the South China Sea.

Mr. Abe said that those disputes were a “matter of interest for the entire global community” and that he welcomed Mr. Duterte’s efforts “to improve and further advance the relationship between the Philippines and China.” ”

There are a number of good comments. Here is one I partly agree with:

“What we need in an Asian ally is a principled, non-corrupt government that sees the China threat as we do.

The Socialist Republic of Vietnam. If Duterte does not like our subsidizing of his defense costs, maybe Vietnam will.”

China has been blocking fishermen from a reef near the Philippines for four years, in another flash point in the dispute over the South China Sea.

Source: Our Boat Was Intercepted by China – The New York Times

The take over of Scarborough Shoals off the coast of the Philippines by China is an egregious example of Chinese arrogance and greed. I look forward to the countries of the South China Sea, with the help of the US and Australia, pushing the Chinese back to China.

“MANILA — Even amid the slaughter of President Rodrigo Duterte’s war on drugs, the killings of Renato and Jaypee Bertes stand out.

The Bertes men, father and son, shared a tiny, concrete room with six other people in a metropolitan Manila slum, working odd jobs when they could find them. Both smoked shabu, a cheap form of methamphetamine that has become a scourge in the Philippines. Sometimes Jaypee Bertes sold it in small amounts, relatives said.

So it was unsurprising when the police raided their room last month.They were arrested and taken to a police station where, investigators say, they were severely beaten, then shot to death.The police said the two had tried to escape by seizing an officer’s gun. But a forensic examination found that the men had been incapacitated by the beatings before they were shot; Jaypee Bertes had a broken right arm.”