“ATHENS — If you’re looking for an optimistic story in Europe, try Greece. Yes, you read that right. Having lost a quarter of its economy in a devastating recession, Greece has turned the corner, its democracy intact, its extremist temptations defeated and its anti-Americanism defunct.

The landslide election on Sunday of Kyriakos Mitsotakis, the dynamic leader of the center-right New Democracy party, marked the end of a chapter. Greece rejected Alexis Tsipras, the leftist leader who took the country to the brink of ruin in 2015 before discovering a pragmatic streak. It also voted the neo-Nazi Golden Dawn out of Parliament. At the height of the crisis, Golden Dawn had become the country’s third-largest party.

First into populism, Greece is now first out. For a country in free fall, the anchors of the European Union and NATO are not so negligible after all. Europe is not simply a story of growing nationalism and xenophobia. It’s a continent in violent flux, torn between liberal democratic and nativist currents.

Despite unemployment that reached almost 30 percent, a chaotic near-exit from the euro, huge bailouts to save it from bankruptcy, mandated austerity programs and a wave of desperate refugees from Syria, Greece stabilized itself. It’s a reminder that reports of democracy’s demise are exaggerated.”

His brown eyes sunken and flat, Jahangir Baroch had spent another sleepless night in the metal container on the Greek island of Lesbos where he has lived for more than a year.

“There was no electricity in the container last night,” Mr. Baroch, 26, said desperately, at a center for refugees, away from the holding camp in Moria, where he is housed. “It was like a fridge.”

“I want to go to Athens,” said Mr. Baroch, who came from Baluchistan, an embattled province in Pakistan. “If you don’t want me, I want to go to another country.”

Others are asking the same question two years after the European Union struck a deal with Turkey aimed at cutting off the route across the Aegean Sea for asylum seekers, many propelled by wars in Syria, Iraq and Afghanistan.

Since then, thousands have remained stranded on Lesbos, unwilling to go back to the countries they left, unable to move forward, toward the opportunity they had hoped to find in Europe. Though the numbers are fewer, they keep coming.

The lucky ones, whose asylum applications are accepted, are eventually shipped to the Greek mainland. Those whose applications are rejected (they can apply twice) are sent back to Turkey as part of the deal with the European Union.

via Greece’s Island of Despair – The New York Times

“Diogenes (/daɪˈɒdʒəˌniːz/; Greek: Διογένης, Diogenēs [di.oɡénɛ͜ɛs]) was a Greek philosopher and one of the founders of Cynic philosophy. Also known as Diogenes the Cynic (Ancient Greek: Διογένης ὁ Κυνικός, Diogenēs ho Kunikos), he was born in Sinope (modern-day Sinop, Turkey), an Ionian colony on the Black Sea,[1] in 412 or 404 BC and died at Corinth in 323 BC.[2]

Diogenes was a controversial figure. His father minted coins for a living, and when Diogenes took to debasement of currency, he was banished from Sinope.[1] After being exiled, he moved to Athens and criticized many cultural conventions of the city. Diogenes modelled himself on the example of Heracles. He believed that virtue was better revealed in action than in theory. He used his simple lifestyle and behaviour to criticize the social values and institutions of what he saw as a corrupt or at least confused society. In a highly non-traditional fashion, he had a reputation of sleeping and eating wherever he chose and took to toughening himself against nature. He declared himself a cosmopolitan and a citizen of the world rather than claiming allegiance to just one place. There are many tales about his dogging Antisthenes’ footsteps and becoming his “faithful hound”.[3]

Diogenes made a virtue of poverty. He begged for a living and often slept in a large ceramic jar in the marketplace.[4] He became notorious for his philosophical stunts such as carrying a lamp in the daytime, claiming to be looking for an honest man. He criticized and embarrassed Plato, disputed his interpretation of Socrates and sabotaged his lectures, sometimes distracting attendees by bringing food and eating during the discussions. Diogenes was also noted for having publicly mocked Alexander the Great.[5][6][7] 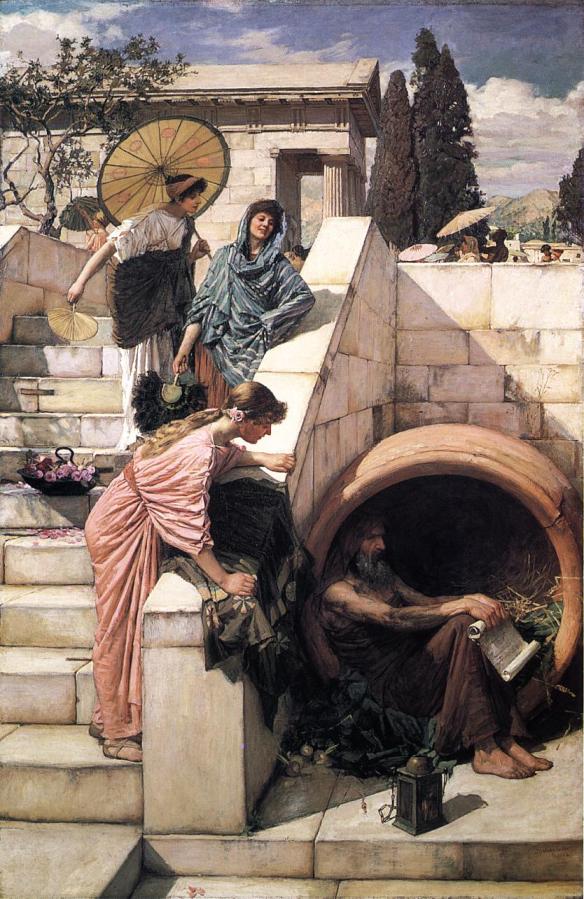 After being captured by pirates and sold into slavery, Diogenes eventually settled in Corinth. There he passed his philosophy of Cynicism to Crates, who taught it to Zeno of Citium, who fashioned it into the school of Stoicism, one of the most enduring schools of Greek philosophy. None of Diogenes’s many writings have survived, but details of his life come in the form of anecdotes (chreia), especially from Diogenes Laërtius, in his book Lives and Opinions of Eminent Philosophers. All that is available are a number of anecdotes concerning his life and sayings attributed to him in a number of scattered classical sources.[8]”