QAMISHLI, Syria — When the international manhunt for Abu Bakr al-Baghdadi, the leader of the Islamic State, zoomed in on a village in northwestern Syria, the United States turned to its local allies to help track the world’s most-wanted terrorist.

The American allies, a Kurdish-led force that had partnered with the United States to fight ISIS, sent spies to watch his isolated villa. To confirm it was him, they stole a pair of Mr. al-Baghdadi’s underwear — long, white boxers — and obtained a blood sample, both for DNA testing, the force’s commander, Mazlum Abdi, said in a phone interview on Monday.

American officials would not discuss the specific intelligence provided by the Kurds, but said that their role in finding Mr. al-Baghdadi was essential — more so than all other countries combined, as one put it — contradicting President Trump’s assertion over the weekend that the United States “got very little help.”

Yet even as the Syrian Kurdish fighters were risking their lives in the hunt that led to Mr. al-Baghdadi’s death this weekend, Mr. Trump abruptly shattered America’s five-year partnership with them.

Subscribe for original insights, commentary and discussions on the major news stories of the week, from columnists Max Fisher and Amanda Taub.

Admiral McRaven is a former commander of the United States Special Operations Command.

“But the most poignant recognition that evening was for a young female sailor who had been killed in Syria serving alongside our allies in the fight against ISIS. Her husband, a former Army Green Beret, accepted the award on her behalf. Like so many that came before her, she had answered the nation’s call and willingly put her life in harm’s way.

For everyone who ever served in uniform, or in the intelligence community, for those diplomats who voice the nation’s principles, for the first responders, for the tellers of truth and the millions of American citizens who were raised believing in American values — you would have seen your reflection in the faces of those we honored last week.

But, beneath the outward sense of hope and duty that I witnessed at these two events, there was an underlying current of frustration, humiliation, anger and fear that echoed across the sidelines. The America that they believed in was under attack, not from without, but from within.

These men and women, of all political persuasions, have seen the assaults on our institutions: on the intelligence and law enforcement community, the State Department and the press. They have seen our leaders stand beside despots and strongmen, preferring their government narrative to our own. They have seen us abandon our allies and have heard the shouts of betrayal from the battlefield. As I stood on the parade field at Fort Bragg, one retired four-star general, grabbed my arm, shook me and shouted, “I don’t like the Democrats, but Trump is destroying the Republic!”

If our promises are meaningless, how will our allies ever trust us? If we can’t have faith in our nation’s principles, why would the men and women of this nation join the military? And if they don’t join, who will protect us? If we are not the champions of the good and the right, then who will follow us? And if no one follows us — where will the world end up?”

“WASHINGTON — American commandos were working alongside Kurdish forces at an outpost in eastern Syria last year when they were attacked by columns of Syrian government tanks and hundreds of troops, including Russian mercenaries. In the next hours, the Americans threw the Pentagon’s arsenal at them, including B-52 strategic bombers. The attack was stopped.

That operation, in the middle of the American-led campaign against the Islamic State in Syria, showed the extent to which the United States military was willing to protect the Syrian Kurds, its main ally on the ground.

But now, with the White House revoking protection for these Kurdish fighters, some of the Special Forces officers who battled alongside the Kurds say they feel deep remorse at orders to abandon their allies.

“They trusted us and we broke that trust,” one Army officer who has worked alongside the Kurds in northern Syria said last week in a telephone interview. “It’s a stain on the American conscience.”

WASHINGTON — The last time the United States abandoned allies in the Middle East, military officials say, it helped lead to the Iraq war.

It is too soon to say with any certainty where Mr. Trump’s abandonment of the Kurdish fighters who did the heavy lifting in the fight against the Islamic State will lead. But already, anguished American military and national security officials are sounding alarms that clearing the way for Turkey to bomb the Kurds could have long-term repercussions, just as the desertion of allies did then.

“In the course of American history, when we have stuck with our allies in troubling circumstances, from the U.K. and Australia under attack in WWII to South Korea in the Korean War, things tend to work out to our benefit,” said James G. Stavridis, a retired admiral and former supreme allied commander for Europe. “When we walk away from loyal allies, as we did in Vietnam and are now threatening to do in Afghanistan and Syria, the wheels come off.” 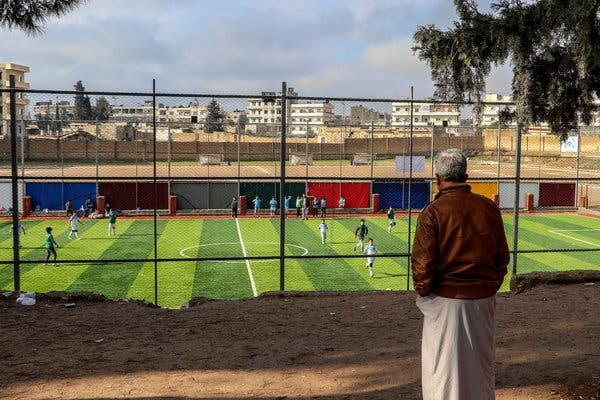 “AFRIN, Syria — For more than a week, my home in northwestern Syria has been under a full-scale assault by the Turkish Army and thousands of Turkish-aligned Islamist jihadists.

Turkey’s president, Recep Tayyip Erdogan, has been threatening this invasion for a very long time. The Turkish Army has been targeting our villages with mortars and artillery for many months now.

I and my fellow members of the Kurdish Women’s and People’s Protection Units, often known as the Y.P.J. and Y.P.G., have fought hard for years to keep the Islamic State out of this autonomous region of Syria known as Rojava. We endured Turkey’s barrages and avoided returning fire, even after civilian casualties, so as not to provide a pretext for this invasion.

But Mr. Erdogan has nevertheless unleashed airstrikes, tanks and troops on this area that was once a relative island of peace in this war-torn country.

One would imagine the international community and especially the United States, which has been more than happy to partner with us in the fight against the Islamic State, would firmly oppose such an unprovoked attack executed in the name of racial hatred — Mr. Erdogan has stated his intention to commit ethnic cleansing of Afrin’s Kurdish population, or, as he says, to give the region to its “real owners” — but instead, it has been greeted largely with silence, and therefore tacitly condoned.”

via We Fought for Our Democracy. Now Turkey Wants to Destroy It. – The New York Times

The US should protect our major ally in the region, who has done the bulk of our fighting.