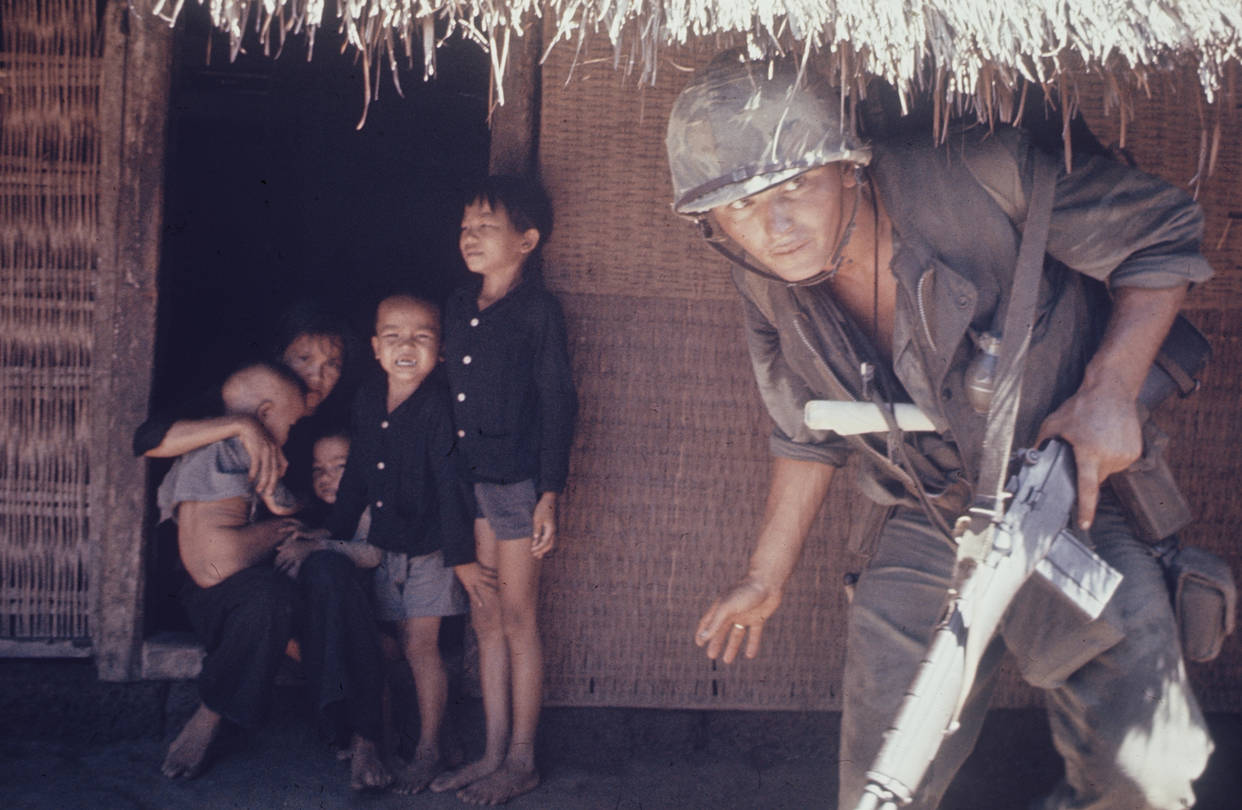 “Edward Lansdale (1908-87) was one of America’s most important military thinkers and practitioners, and yet he is barely known to the wider world. In “The Road Not Taken,” Max Boot aptly calls him “the American T.E. Lawrence ”: eccentric, rebellious and charismatic, a man who had an uncanny way of bonding with Third World leaders and who believed that the art of war was, as Mr. Boot puts it, “to attract the support of the uncommitted.” He changed the. . .”

Source: Review: ‘The Road Not Taken’ in Vietnam – WSJ

I guess Edward Lansdale was my kind of warrior.  As I researched my historical novel of eighteenth century Vietnam, The Tay Son Rebellion, I realized late in the 17 year book effort that I had not read Sun Tzu, the great Chinese military historian,  but one by Musashi, So I finally read The Art of War by Sun Tsu. Is is too bad our military hadn’t studied it before Vietnam, because you can be sure the Vietnames Generals all knew of these ancient tactics, and lived by them.

Know your enemy as well as yourself. Always use dipolomacy, or espionage. Military force shows your incompentance. Never fight unless you are sure you will win. If you are not sure you can win, retreat, and wait for odds to change while you set ambushes and traps. Never invade another country for any long period of time. Always get in, do your business, and get out. If you occupy a foreign country, your supply lines will be long, and your host country will slowly eat you alive.  More at http://www.TheTaysonRebellion.com

Guan YuGuan Yu (Chinese characters).svg”Guan Yu” in Traditional (top) and Simplified (bottom) Chinese charactersTraditional Chinese 關羽Simplified Chinese 关羽[show]TranscriptionsGuan Yu (died 220 CE),[1] courtesy name Yunchang, was a general serving under the warlord Liu Bei in the late Eastern Han dynasty. He played a significant role in the events that led to the collapse of the dynasty and the establishment of the state of Shu Han – founded by Liu Bei – in the Three Kingdoms period. After Liu Bei gained control of Yi Province in 214, Guan Yu remained in Jing Province to govern and defend the area for about seven years. In 219, while he was away fighting Cao Cao’s forces at the Battle of Fancheng, Liu Bei’s ally Sun Quan broke the Sun–Liu alliance and sent his general Lü Meng to invade and conquer Liu Bei’s territories in Jing Province in a stealth operation. By the time Guan Yu found out about the loss of Jing Province after his defeat at Fancheng, it was too late. He was subsequently captured in an ambush by Sun Quan’s forces and executed.[2]As one of the best known Chinese historical figures throughout East Asia, Guan Yu’s true life stories have largely given way to fictionalised ones, most of which are found in the 14th-century historical novel Romance of the Three Kingdoms or passed down the generations, in which his deeds and moral qualities have been lionised. Guan Yu is respected as an epitome of loyalty and righteousness.

Guan Yu was deified as early as the Sui dynasty and is still worshipped by many Chinese people today in mainland China, Taiwan, Hong Kong, and among many overseas Chinese communities. In religious devotion he is reverentially called the “Divus Guan” (Guāndì) or “Lord Guan” (Guāngōng). He is a deity worshipped in Chinese folk religion, popular Confucianism, Taoism, and Chinese Buddhism, and small shrines to him are almost ubiquitous in traditional Chinese shops and restaurants. His hometown Yuncheng has also named its airport after him.”

Guan Yu was made famous, to the point of being almost deified, in the famous historical novel, Romance of the Three Kingdoms, one of the four most famous novels of early Chinese literature.

“For positive proof that in certain realms of theater, we have moved firmly beyond political correctness, see “Vietgone,” a raucous comedy by Qui Nguyen that strafes just about every subject it tackles and every character it presents. Sure, sometimes it wobbles uncertainly between satire and sentiment, but Mr. Nguyen’s fresh and impish voice rarely lets up as he thumbs his nose at our expectations.

As the character of the playwright (Paco Tolson) explains at the top of the show, the principals are Vietnamese who become refugees in America. The show is set in 1975, but these characters, he says, won’t sound the way you might expect them to. Scanning the audience at City Center, where the play opened on Tuesday in a Manhattan Theater Club production, Tong (Jennifer Ikeda), a 30-year-old Vietnamese woman, observes, “Damn, there’s a lotta white people up in here.”This voice, the playwright reminds us, is more or less the opposite of the Asian one of stereotype, as in: “Herro! Prease to meeting you! I so Asian!” The Americans in the play, he adds, will speak like this: “Yee-haw! Get ’er done! Cheeseburger, waffle fries, cholesterol!” They do indeed.:

My friend and director Lauren Keating highly recommends this play.  I haven’t seen it.

Here are two comments after the reveiew:

I’ve seen both productions; having been blown away by what I saw at the Oregon Shakespeare Festival in the summer, I looked forward to a second viewing here. I thought the actors in Oregon rendered the play more compellingly; in particular, I thought Jeena Yi in Oregon occupied the character of Tong more convincingly, helped by her greater command of the rap idiom. The thrust stage in Oregon also put the actors in different proximity to that of MTC’s standard type of stage, and that gave the OSF a certain immediacy that the MTC production loses with its traditionally configured house. Having said all that, this is a play so worth seeing: fresh, emotional, provocative. Highly recommended.

This was the most infantile piece of nothing”.I left during the intermission, because I could not take it anymore.At least 40 people did the same.It was easy to count them as we were all gathering at the entrance waiting for the terrible rain to stop.
Fot the first time in 35 years I was really (!!)tempted to walk by the stage in a theatre and “BOOH”

“Many people have characterized my novel, “The Sympathizer,” as an immigrant story, and me as an immigrant. No. My novel is a war story and I am not an immigrant. I am a refugee who, like many others, has never ceased being a refugee in some corner of my mind.Immigrants are more reassuring than refugees because there is an endpoint to their story; however they arrive, whether they are documented or not, their desires for a new life can be absorbed into the American dream or into the European narrative of civilization.

By contrast, refugees are the zombies of the world, the undead who rise from dying states to march or swim toward our borders in endless waves. An estimated 60 million such stateless people exist, 1 in every 122 people alive today. If they formed their own country, it would be the world’s 24th largest — bigger than South Africa, Spain, Iraq or Canada”

“LOS ANGELES — THURSDAY, the last day of April, is the 40th anniversary of the end of my war. Americans call it the Vietnam War, and the victorious Vietnamese call it the American War. In fact, both of these names are misnomers, since the war was also fought, to great devastation, in Laos and Cambodia, a fact that Americans and Vietnamese would both rather forget.

In any case, for anyone who has lived through a war, that war needs no name. It is always and only “the war,” which is what my family and I call it. Anniversaries are the time for war stories to be told, and the stories of my family and other refugees are war stories, too. This is important, for when Americans think of war, they tend to think of men fighting “over there.” The tendency to separate war stories from immigrant stories means that most Americans don’t understand how many of the immigrants and refugees in the United States have fled from wars — many of which this country has had a hand in.

Although my family and other refugees brought our war stories with us to America, they remain largely unheard and unread, except by people like us. Compared with many of the four million Vietnamese in the diaspora, my family has been lucky. None of my relatives can be counted among the three million who died during the war, or the hundreds of thousands who disappeared at sea trying to escape by boat. But our experiences in coming to America were difficult.”

“There’s a great comic interlude in Viet Thanh Nguyen’s novel “The Sympathizer” when the unnamed narrator, a Vietnamese Army captain exiled in Los Angeles, critiques the screenplay of a gung-ho Hollywood movie about America’s heroism in the Vietnam War.

By this time, a lot of things have already happened. Saigon has fallen. Chaos has closed in. The captain has secured the bloody, terrifying extraction of his boss, a pro-American general, on one of the last flights out (were there any other kind of flights in Saigon in 1975?). Working as an aide and sometime hit man for the general, now a California liquor-store owner, the captain applies himself to his real job: spying on the general, and other members of the Vietnamese diaspora, for the Communists who seized power back home.”

Source: Review: ‘The Sympathizer,’ a Novel About a Soldier, Spy and Film Consultant – The New York Times

“LOS ANGELES — Viet Thanh Nguyen has been wrestling with “Apocalypse Now” for most of his life — as a boy, a college student, a scholar, a writer of fiction. The movie was initially a source of pain, then a puzzle to be understood, and finally an inspiration for his novel about a Vietnamese spy, “The Sympathizer.”

Even now, after a rapturous reception for the novel, his first, that included the 2016 Pulitzer Prize for fiction, Mr. Nguyen’s feelings about Francis Ford Coppola’s 1979 war epic are still somewhat raw.“‘Apocalypse Now’ is an important work of art,” Mr. Nguyen, 45, said in an interview at his house here. “But that doesn’t mean I’m going to bow down before it. I’m going to fight with it because it fought with me.””

Source: For Viet Thanh Nguyen, Author of ‘The Sympathizer,’ a Pulitzer but No Peace – The New York Times