“Let’s be blunt: China is accumulating a record of Orwellian savagery toward religious people.

At times under Communist Party rule, repression of faith has eased, but now it is unmistakably worsening. China is engaging in internment, monitoring or persecution of Muslims, Christians and Buddhists on a scale almost unparalleled by a major nation in three-quarters of a century.

Maya Wang of Human Rights Watch argues that China under Xi Jinping “poses a threat to global freedoms unseen since the end of World War II.”

To its credit, China has overseen extraordinary progress against poverty, illiteracy and sickness. The bittersweet result is that Chinese people of faith are more likely than several decades ago to see their children survive and go to university — but also to be detained.

China’s roundup of Muslims in internment camps — which a Pentagon official called concentration camps — appears to be the largest such internment of people on the basis of religion since the collection of Jews for the Holocaust. Most estimates are that about one million Muslims have been detained in China’s Xinjiang region, although the Pentagon official suggested that the actual number may be closer to three million.”

In September 2015, Dr. Filardi and a team of researchers from the museum and the University of the South Pacific ascended the rugged Chupukama Ridge, on Guadalcanal, one of the Solomon Islands, which he described in his field journal as “a sky island filled with scientific mystery.” The goal of the mission was not only to study Guadalcanal’s ecosystems, but to make the case for preserving them at a time when the Solomon Islands are under pressure to open more land up to logging and mining. 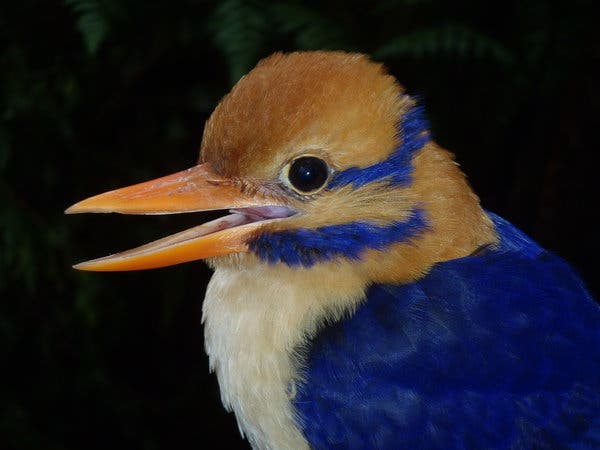 On the third morning, the sound of “kokoko-kiew” pulsed through the forest. The call was unmistakably a forest kingfisher’s. Dr. Filardi’s heart raced. For 20 years, he’d been searching for the mustached kingfisher, known as a “ghost” bird. Only three individuals, all female, had been discovered by scientists over the past century. There were no male specimens in any of the world’s museums; not even a photo of one was known to exist. He got a glimpse of the bird, just a flash of blue and gold, before it vanished.

Days later, when the team captured a male in a mist net, Dr. Filardi gasped. “One of the most poorly known birds in the world was there, in front of me, like a creature of myth come to life,” he wrote in a dispatch to the museum.

While the expedition was still underway, the museum released the first photographs of the bird, which seemed to be mugging for the camera. The mustached kingfisher became a viral celebrity, under headlines like “ridiculously gorgeous.”

It wasn’t until the public realized that Dr. Filardi had “collected” the bird — killing it for the museum’s research collection — that the adulation turned to venom.”

Source: Opinion | The Ornithologist the Internet Called a Murderer – The New York Times

David Lindsay:  Horrible story, well reported, good comments. PETA and the bullies who have hounded this great scientist into hiding should be taken to court. I don’t know how, but they are acting like a pack of hyenas. Edward O Wilson of Harvard has written in his great short book “Half Earth,” that we desperately need more naturalists to go out and catalog and map the ecosystems of myriad species that we know so little about.

SINGAPORE – With labour migration on the rise across ASEAN, countries like Việt Nam, which sends a large number of workers abroad and relies on remittances for 7 per cent of its GDP, should strengthen protections for workers while lowering barriers to their mobility, argues a new World Bank report released yesterday in Singapore.The report, “Migrating to Opportunity”, highlights the importance of migrant workers to the region as a whole: ASEAN countries received US$62 billion in remittances in 2015. It also articulates challenges faced by ASEAN migrant workers, focusing on barriers to their mobility. The report concludes that removing barriers for skilled workers and decreasing obstacles for all workers would increase ASEAN worker welfare by 14 and 12 per cent respectively.

Labour migration rose significantly between 1995 and 2015, with Singapore, Malaysia and Thailand becoming the regional migration hubs. The significant differences in wages among ASEAN countries create opportunities for workers to earn more money when they cross the borders. Migration usually increases the salaries in receiving countries, which benefits both migrant workers and local ones.But migrant workers are often vulnerable, and policies across the region do little to address their needs. According to UN data, 80 per cent of intra-ASEAN migrants are low-skilled and many of them are undocumented. Contruction, plantation and domestic services are the sectors that receive most of migrant workers.

“Prime Minister Hun Sen of Cambodia has been in power for more than 30 years. On Wednesday, he vowed to stay in power. “After witnessing the treasonous acts of some Cambodians in recent days,” he said, “I have decided to continue my job for another 10 years.” Citizens might have thought it was up to them to decide, in general elections next year, who will govern their country. Mr. Hun Sen has set them straight: He has no intention of losing that election or future ones to an opposition that did better than expected in the last vote in 2013. If this means charging opposition leaders with treason, so be it.”