“Most of the men in the first wave never stood a chance. In the predawn darkness of June 6, 1944, thousands of American soldiers crawled down swaying cargo nets and thudded into steel landing craft bound for the Normandy coast. Their senses were soon choked with the smells of wet canvas gear, seawater and acrid clouds of powder from the huge naval guns firing just over their heads. As the landing craft drew close to shore, the deafening roar stopped, quickly replaced by German artillery rounds crashing into the water all around them. The flesh under the men’s sea-soaked uniforms prickled. They waited, like trapped mice, barely daring to breathe.

A blanket of smoke hid the heavily defended bluffs above the strip of sand code-named Omaha Beach. Concentrated in concrete pill boxes, nearly 2,000 German defenders lay in wait. The landing ramps slapped down into the surf, and a catastrophic hail of gunfire erupted from the bluffs. The ensuing slaughter was merciless.

But Allied troops kept landing, wave after wave, and by midday they had crossed the 300 yards of sandy killing ground, scaled the bluffs and overpowered the German defenses. By the end of the day, the beaches had been secured and the heaviest fighting had moved at least a mile inland. In the biggest and most complicated amphibious operation in military history, it wasn’t bombs, artillery or tanks that overwhelmed the Germans; it was men — many of them boys, really — slogging up the beaches and crawling over the corpses of their friends that won the Allies a toehold at the western edge of Europe.

Pyle was beloved by readers and service members alike for his coverage of the war through the eyes of the regular infantrymen on the front lines.”
CreditBettmann Archive/Getty Images 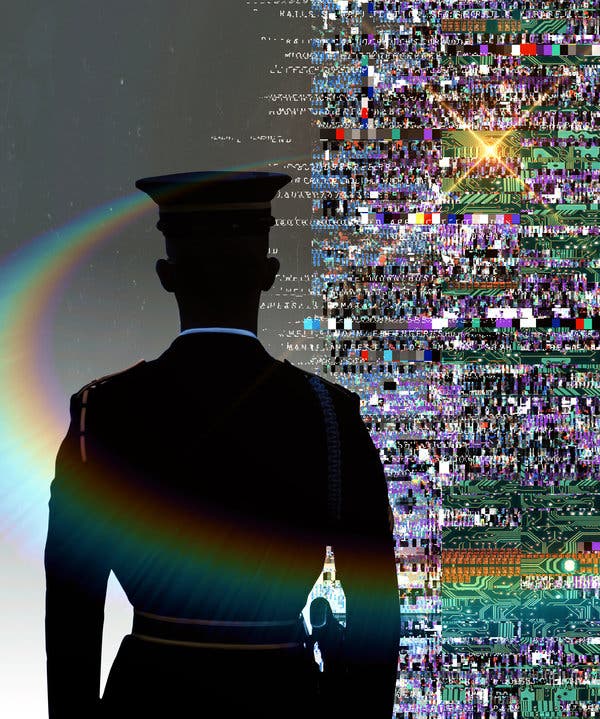 CreditYoshi Sodeoka
In 2014, the United States Army Research Laboratory published a report predicting what the battlefield of 2050 would look like. Not surprisingly, it was a scenario largely driven by technology, and the report described a sort of warfare most people associate with video games or science-fiction movies — combined forces of augmented or enhanced humans, robots operating in swarms, laser weapons, intelligence systems and cyberbots fighting in a highly contested information environment using spoofing, hacking, misinformation and other means of electronic warfare.

In one sense, this is nothing new. The way wars are fought have always changed with technology. But humans themselves don’t change so rapidly. As a retired Air Force major general with special interests in both technology and military ethics, I have a specific concern: that as new weapons technologies make soldiering more lethal, our soldiers will find it more difficult than ever to behave ethically and to abide by the long-established conventions regarding the rules of war.

Can soldiers under the influence of behavior-modifying drugs or electronics be held to account for their actions? If the soldier is using drugs to enhance his cognition or reduce his fear, what is the role of free will? Might a soldier who fears nothing unnecessarily place himself, his unit or innocent bystanders at risk? What about the impact of memory-altering drugs on the soldier’s sense of guilt, which might be important in decisions about unnecessary and superfluous suffering?

These are important decisions in war, and they form the basis for many of the tenets of “just war” theory. Gen. Paul Selva, the vice chairman of the Joint Chiefs of staff, supports “keeping the ethical rules of war in place lest we unleash on humanity a set of robots that we don’t know how to control.”

The role of revising and recasting these conventions should be taking place at the highest levels of government. So far, it hasn’t. The White House’s Select Committee on Artificial Intelligence, formed in May, has not even acknowledged the major ethical issues surrounding A.I. that have been very publicly raised by an increasing number of scientists and technology experts like Elon Musk, Bill Gates and Stephen Hawking.

While it is important that leaders openly recognize the critical nature of these issues, the Department of Defense needs to follow up on its 2012 directive on autonomy with guidelines for researchers and commanders. It should require that both researchers and military commanders question — throughout the development process and long before the systems are ready for deployment — how the systems will be used and whether that use might violate any of laws of armed conflict and international humanitarian law.

via Opinion | Rebooting the Ethical Soldier – The New York Times