Gail Collins: Bret, how do you feel about billionaires? Not personally — I’m sure some of your best friends are billionaires — but as presidential candidates. Ever since Michael Bloomberg started running, there’s been a lot of complaining about rich guys trying to buy the race. Does that worry you, or do you find people like Bloomberg and Tom Steyer to be, um, valuable additions?

Bret Stephens: I guess it depends on who the billionaires are, how they made their money, and what they’ve done with it. There’s a world of difference between someone like Mike Bloomberg — who came from relatively humble beginnings, made his fortune honestly, ran his businesses capably, devoted a significant amount of his life to public service and then gave billions away to great causes — and someone like Donald Trump, who did none of those things.

Gail: Thank you for throwing in an attack on President Trump. Really, is there any topic that doesn’t offer some opportunity to snipe at our commander in chief? I notice he’s blaming energy-efficient light bulbs for his orange skin tone.

Bret: They use energy-efficient light bulbs on tanning beds now?

Gail: I’ll bet we could talk about the presidential complexion all day and the readers would be extremely happy to chime in and keep it going for another week. But of course we’re above that.

David Lindsay Jr.
Hamden, CT | Pending Approval
Draft 2
Fellow commentators! You don’t have to agree with Bret Stevens, but you do have to listen to his advice. His conservative views are closer to the views of the majority in the crucial swing states than the views of us progressives on either coast. We don’t need more votes in New York or California, we need the six crucial swing states that gave Trump the electoral college. Wake up. Look at the polls. Every conservative in Connecticut I have interviewed, has said that they will not support or vote for Sanders or Warren. Either one of these fine progressives will crush Trump in the popular vote, but deliver to him the presidency, that is what people like Bret Stevens are trying to warn you to be aware of. We have to take the White House, to put the war on climate change on hyper drive and rebuild the middle class. The sure way for Pete Buttigieg to win the support of the black community, is to support the candicacy of their favorite candidate, Joe Biden, and try to become his vice president. (David blogs at InconvenientNews.net.)

Gail Collins: Bret, where should we start? Democratic debate? Impeachment? Mideast crisis? Rudy Giuliani? Actually, as a New Yorker I always figured that someday Rudy would do something even more outrageous than the time he called a news conference to announce he was separating from his wife before he told said spouse. But I did not imagine it would include sleazy Ukrainians and Joe Biden’s son.

But hey, it’s debate day. Let’s start with the Democrats. Who do you like tonight?

Bret Stephens: Well, if you don’t mind, I’d like to start with a certain Gail Collins, whose extraordinary history of older women in America, “No Stopping Us Now,” hits bookstores this week. Congratulations!

Gail: Thanks! You’ve made my day.

I know we don’t often discuss foreign affairs, but I feel sick about the way in which President Trump has betrayed our Kurdish allies. They lost thousands of soldiers to defeat the Islamic State, which made it possible to keep American casualties to a minimum in that fight. And now we’ve sold them out to a Turkish strongman who takes Americans hostage, locks up his political opponents by the thousands, makes common cause with Hamas, mutters anti-Semitic garbage, blackmails Europe, attempts to steal elections and builds a gigantic palace for himself.

It’s one of the lowest moments in American foreign policy. Which is to say, just another day in Trumpworld. 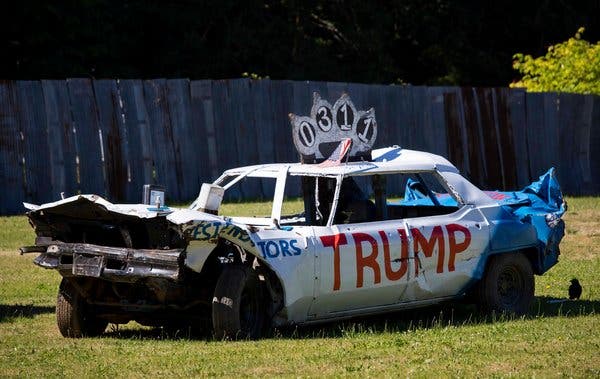 By Gail Collins and Bret Stephens
Ms. Collins and Mr. Stephens are opinion columnists. They converse every other week.

A demolition derby car in Forks, Wash.CreditRuth Fremson/The New York Times
Gail Collins: Bret, there are so many things to say about the Trump-Putin press conference in Helsinki. But let me admit that my absolute top take away was that at a critical moment in modern American history, our president managed to mention his winning margin in the Electoral College.

I’m not normally a speechless person but wow. Tell me everything you’re thinking.

Bret Stephens: The 25th Amendment. You know the one: the mechanisms for removal of a president who is manifestly unfit for office.

Gail: To think that just last weekend we thought he was only unfit for office because he was a morally bankrupt egomaniac with a very shady legal history. Those were the days.

Bret: Also, I’m thinking about just what Sean Hannity, Laura Ingraham and the rest of right-wing punditry would be saying if it had been President Barack Obama at that podium, saying the sort of things Trump was saying, not to mention the way he said it.

via Opinion | After You, Mr. Putin – The New York Times

David Lindsay:   What a great day for opinion and good sentences at the NYT. Brett sounds down right patriotic and apoplectic, somewhat surprising, given that he is a very right wing conservative ideologue.

Gail Collins: Bret, I’m on book leave until August, but I didn’t really want to spend two months devoid of conversation. So I’m going to keep dropping in unless President Trump agrees to go away for the summer, too.I wonder if he’d send me a pardon if I failed to meet my deadline. Seems to work for everybody else. Give me your predictions of who else you think will get a presidential get-out-of-jail card.Bret Stephens: We’re going to miss you this summer, Gail, so I’m glad we still get our periodic chats.The pardon power, historically, is supposed to be an instrument of individual mercy — like Lincoln’s many pardons of Union soldiers with “cowardly legs” — and a means of political reconciliation, like Ford’s controversial-but-wise pardon of Nixon. I’m not sure exactly when it became an instrument of personal or political self-dealing, though Bill Clinton’s disgraceful pardon of Marc Rich just as he was leaving office in 2001 comes to mind.

Yes, and here are some of my favorite of many good comments.

celia
also the west2h ago

I fail to understand why a not-for-profit, single-payer health care system merits an ‘egads’. Why is a health insurance industry driven ‘for-maximum-profit’ system better?
You do know, don’t you, that Americans pay more for their health coverage than any other western country?

I borrow from Peter and Paul
And never paid either at all
The greatest flimflammer
For Putin I clamor
And I think I am building a Wall.

My Cabinet radiates good will
To all whose actions reek of ill
I outshine Abe Lincoln
I’m better at thinkin’
And FDR’s bills were sheer swill.

I want the world’s biggest parade
Divert from the mess Barack made
Put Hillary in jail
Make Black people pale
In buckets of plunder I’ll wade.

Bret Stephens is one of the most eloquent and insightful critics of Donald Trump writing today. So it’s sometimes easy to forget that he’s a dyed-in-the-wool conservative. His lauding of a huge corporate tax cut that most assuredly “blows a hole in the federal fisc” while slamming Medicare for all because it would supposedly do the same is a stark reminder of just which way he leans.