“When Joe Biden debates President Trump on Tuesday, he will have to figure out how to parry with an opponent who habitually lies and doesn’t play by the rules.

As a psychiatrist, I’d like to offer Mr. Biden some advice: Don’t waste your time fact-checking the president. If you attempt to counter every falsehood or distortion that Mr. Trump serves up, you will cede control of the debate. And, by trying to correct him, you will paradoxically strengthen the misinformation rather than undermine it. (Research shows that trying to correct a falsehood with truth can backfire by reinforcing the original lie. )

Instead, Mr. Biden should use more powerful weapons that will put Mr. Trump on the defensive — and also tell the audience that the president is a dishonest narrator.

The first weapon maybe the most effective: humor and ridicule. A derisive joke can defuse tense and outrageous situations. In 2007, for example, protesters dressed as clowns confronted a “white power” march in Charlotte, N.C., holding signs that read “wife power” and throwing white flour in the air. It made the white nationalists look ridiculous and avoided a violent confrontation, which would have served the interests of the racists.” 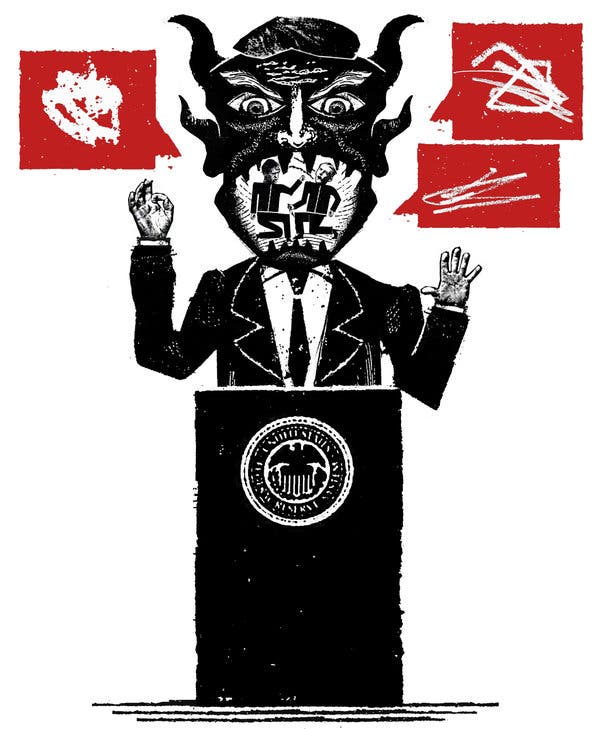 Since he has been in office, President Trump has relentlessly demonized his political opponents as evil and belittled them as stupid. He has called undocumented immigrants animals. His rhetoric has been a powerful contributor to our climate of hate, which is amplified by the right-wing media and virulent online culture.

Of course, it’s difficult to prove that incendiary speech is a direct cause of violent acts. But humans are social creatures — including and perhaps especially the unhinged and misfits among us — who are easily influenced by the rage that is everywhere these days. Could that explain why just in the past two weeks we have seen the horrifying slaughter of 11 Jews in a synagogue in Pittsburgh, with the man arrested described as a rabid anti-Semite, as well as what the authorities say was the attempted bombing of prominent Trump critics by an ardent Trump supporter?

You don’t need to be a psychiatrist to understand that the kind of hate and fear-mongering that is the stock-in-trade of Mr. Trump and his enablers can goad deranged people to action. But psychology and neuroscience can give us some important insights into the power of powerful people’s words.

We know that repeated exposure to hate speech can increase prejudice, as a series of Polish studies confirmed last year. It can also desensitize individuals to verbal aggression, in part because it normalizes what is usually socially condemned behavior.

via Opinion | The Neuroscience of Hate Speech – The New York Times

Yes, and here is the top comment to reflect on.

We have seen this phenomena previously not too long ago, it was at the core of the Third Reich, it was a cascade of propaganda not unlike Fox news. It demonized not only Jews, but Gypsys, Blcks, non Aryans, it allowed it followers to kill millions of innocent fellow humans with no regrets, not even a bit of pity. Now we see what we could call “Son of Trump,” the logical results of his rhetoric,not unlike Der Fuhrer, following in the path of Goebbels, repeating the same lie as often as possible, and gaining followers by doing so. This synagogue shooting is directly traceable to his rhetoric, this bomber and Jew killer are classic examples of those who just needed an excuse to act. This is the face of the New Nationalist Republican Party. Its leaders do not have the decency to take a stand against this neo Fascist movement, it suits there aims, the GOP is just as complicit as are the actual perpetrators of these current events, they just sit back and let him rant on, it gains them supporters. Oh they make apologetic noises, reading from a script to appease the anger of the community, but is is not genuine, it is scripted, they are dishonest as is their leader. We see interviews with people, mostly in states like Wisconsin, Ohio, Kansas, it is always Kansas where we can find these true believers, they who consider themselves good church going patriotic Americans, helping to turn the country Fascist, a mental condition fostered by a Philistine.