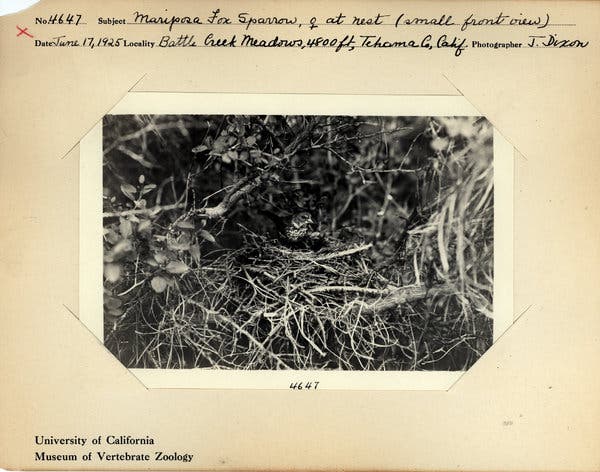 More than a century ago, zoologist Joseph Grinnell launched a pioneering survey of animal life in California, a decades-long quest — at first by Model T or, failing that, mule — to all corners and habitats of the state, from Death Valley to the High Sierra.

Ultimately Grinnell, founding director of the Museum of Vertebrate Zoology at the University of California, Berkeley, and his colleagues produced one of the richest ecological records in the world: 74,000 pages of meticulously detailed field notes, recording the numbers, habits and habitats of all vertebrate species that the team encountered.

In 2003, museum scientists decided to retrace Grinnell’s steps throughout the state to learn what changes a century had wrought. And that’s why Morgan Tingley, then an ecology graduate student at the university, found himself trekking through the Sierra for four summers.

Dr. Tingley wanted to know how birds had fared since Grinnell last took a census. Years later, the answer turned out to be a bit of a shock.

Of 32,000 birds recorded in California mountain ranges in the old and new surveys — from thumb-sized Calliope hummingbirds to the spectacular pileated woodpecker — Dr. Tingley and his colleagues discovered that most species now nest about a week earlier than they did 70 to 100 years ago.