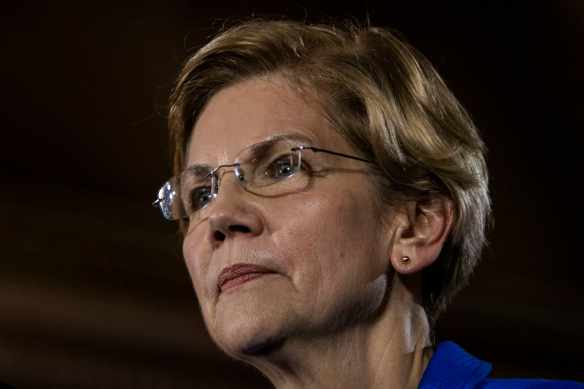 Elizabeth Warren represents Massachusetts in the U.S. Senate and is running for the Democratic presidential nomination.

“Opening unauthorized bank accounts. Cheating customers on mortgages and car loans. Mistreating service members. If you can dream up a financial scam, there’s a good chance that Wells Fargo ran it on its customers in recent years. Last week, after years of pressure, the company finally parted ways with its second chief executive in three years. But that’s not nearly enough accountability. It’s time to reform our laws to make sure that corporate executives face jail time for overseeing massive scams.

In 2016, after the Wells Fargo fake-accounts scam came to light, I called out then-chief executive John Stumpf for gutlessly throwing workers at the bank under the bus — and told him he should resign. Weeks later, he did. When Wells Fargo elevated longtime senior executive Tim Sloan to replace Stumpf, I told Sloan he should be fired for his role in enabling and covering up the fake-accounts scam. For years, I pressured federal regulators, urging Sloan’s dismissal, and last week Sloan “retired.”

Don’t get me wrong. I’m glad Sloan and Stumpf aren’t in charge anymore. But this isn’t real accountability. When a criminal on the street steals money from your wallet, they go to jail. When small-business owners cheat their customers, they go to jail. But when corporate executives at big companies oversee huge frauds that hurt tens of thousands of people, they often get to walk away with multimillion-dollar payouts.”

Have you hear of Elizabeth Warren. In this magnificent op-ed, she writes, “The failure to adequately punish big corporations or their executives when they break the law undermines the foundations of this great country. Justice cannot mean a prison sentence for a teenager who steals a car, but nothing more than a sideways glance at a C.E.O. who quietly engineers the theft of billions of dollars.”