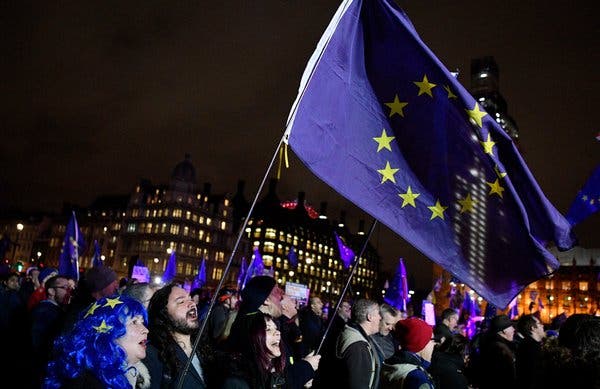 Protesters outside the Houses of Parliament on Tuesday.
Credit
Neil Hall/EPA, via Shutterstock

“A democracy that cannot change its mind is not a democracy. The people may do that when presented with the whole picture after seeing only a partial or distorted one.

It has taken more than 30 months to shift from “Fantasy Brexit” to “Reality Brexit.” The difference, after vitriolic debate that has consumed British politics virtually to the exclusion of all else, is stark.

The first was Britain’s 2016 vote, fueled by lies, to leave the European Union, trumpets blaring. The second, after a crash course in the facts of what membership brings for Britain, came Tuesday in the form of the crushing defeat by a 432-to-202 parliamentary vote of Prime Minister Theresa May’s plan for British withdrawal on March 29.

This, of course, was not a vote to remain in the European Union after all. It reflected anger across ideological lines that united Conservative lawmakers who want a complete British break from Europe and representatives of other parties who want to remain in the 28-nation union. Above all, it reflected complete disarray, the incapacity of May or anyone to come up with an acceptable compromise deal to accomplish something so inherently undesirable as to defy prettification.”