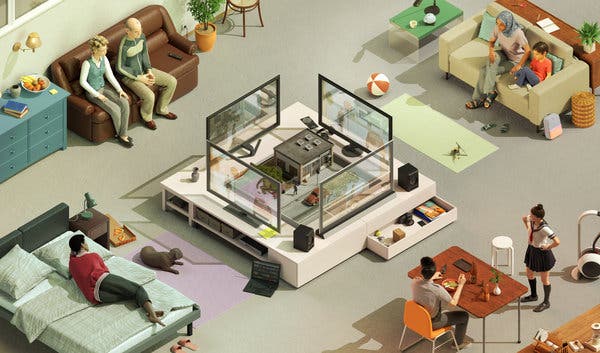 For months after the 2016 election, I wanted nothing more than to escape America. I don’t mean literally — in the cliché liberal way of absconding to Canada — but intellectually, socially, psychically. Donald Trump was all anybody talked about, and I needed sanctuary. I wanted to find places where the American president-elect and his American opponents and their American controversies simply did not exist.

I found such a place in a British reality baking contest. By which I mean I found it on Netflix, which has become the internet’s most invaluable and intoxicating portal to the parts of planet Earth that aren’t America.

On Sunday, Netflix will compete for its first Best Picture Oscar for “Roma,” the Mexican filmmaker Alfonso Cuarón’s exploration of his childhood in Mexico City. A win by “Roma” would be a fitting testament to Netflix’s ambitions. Virtually alone among tech and media companies, Netflix intends to ride a new kind of open-border digital cosmopolitanism to the bank.

For me, it was nice British people politely baking against one another that offered one of the first hints of Netflix’s unusual strategy. “The Great British Baking Show,” for those not in the cult, is an amateur baking contest, and it is one of the least American things you will ever see on TV. It depicts a utopia: a multicultural land of friendly blokes and mums with old-timey jobs — Imelda is a “countryside recreation officer” — blessed with enough welfare-state-enabled free time to attain expertise in British confectionary. To an American, the show suggests a time and place where our own worries have no meaning. And that, more than baking, is what “The Great British Baking Show” is really about.

The show was first produced and aired on British broadcast television (as “The Great British Bake-Off”) and imported to the United States by PBS, which then licensed it to Netflix. But Netflix, which has 139 million paying members around the world, has lately become something more than a licenser of other countries’ escapist television.

In 2016, the company expanded to 190 countries, and last year, for the first time, a majority of its subscribers and most of its revenue came from outside the United States. To serve this audience, Netflix now commissions and licenses hundreds of shows meant to echo life in every one of its markets and, in some cases, to blend languages and sensibilities across its markets (see Marie Kondo’s half-in-Japanese tidying-up blockbuster).

via Opinion | Netflix Is Shrinking the World – The New York Times