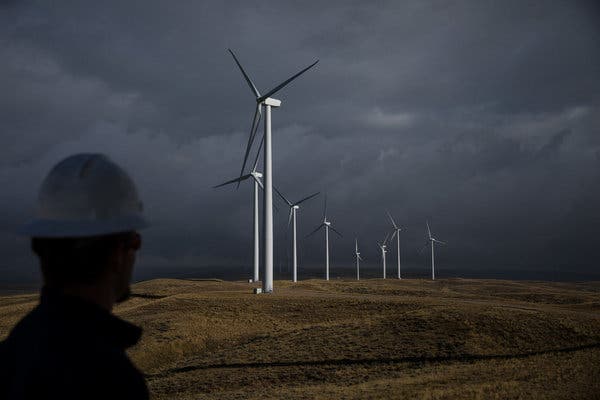 A technician monitoring turbines at a wind farm in Glenrock, Wy.CreditCreditDamon Winter/The New York Times
“Back in 2007, I wrote a column calling for a “Green New Deal,” and I later expanded on the idea in a book, “Hot, Flat and Crowded.” Barack Obama picked up the theme and made a Green New Deal part of his 2008 platform, but the idea just never took off. So I’m excited that the new Democratic Congresswoman Alexandria Ocasio-Cortez and others have put forward their own takes on a Green New Deal, and it’s now getting some real attention.

There is no agreed-upon policy road map for a Green New Deal. But as one of the leading climate bloggers, Joe Romm, recently pointed out, “Since the midterms, dozens of U.S. representatives and at least four Democratic senators have pledged support to create a Select Committee to create legislation for a Green New Deal. The goal is a ‘detailed national, industrial, economic mobilization plan’ to rapidly transition the country away from fossil fuels and toward clean energy, such as a solar, wind, and electric cars.”

The Green New Deal that Ocasio-Cortez has laid out aspires to power the U.S. economy with 100 percent renewable energy within 12 years and calls for “a job guarantee program to assure a living wage job to every person who wants one,” “basic income programs” and “universal health care,” financed, at least in part, by higher taxes on the wealthy. Critics argue that this is technically unfeasible and that combining it with democratic socialist proposals will drive off conservatives needed to pass it.

Myself, I like the urgency and energy she and groups like the Sunrise Movement are bringing to this task. So for now I say: Let a hundred Green New Deal ideas bloom! Let’s see what sticks and what falls by the wayside.”