David: Merry Christmas. Merry Solstice.
Peace on earth and good will to all!

NYT: Seen from space 50 years ago, Earth appeared as a gift to preserve and cherish. What happened?

By Matthew Myer Boulton and Joseph Heithaus
Mr. Boulton is a writer and a filmmaker. Mr. Heithaus is a poet. 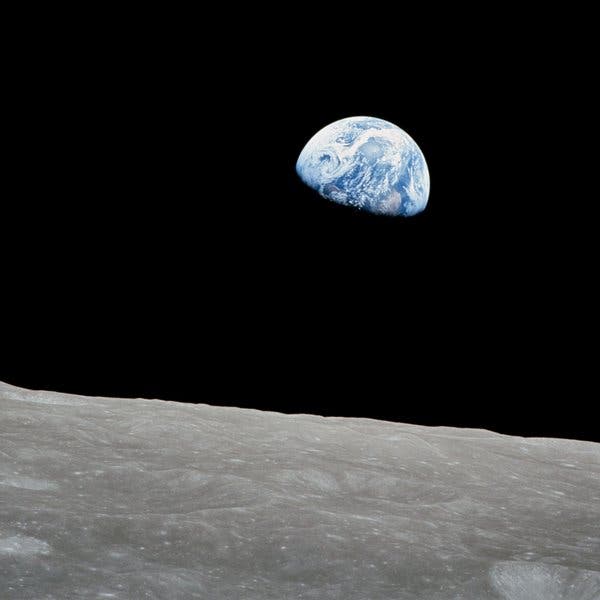 The “Earthrise” photograph taken by William Anders on Apollo 8 on Christmas Eve in 1968.CreditCreditNASA

Even after 50 years, his prescient words speak of the humbling image we now had of Earth, an image captured in a photograph that wouldn’t be developed until the astronauts returned: “Earthrise,” taken by William Anders, one of the Apollo crew. In time, both essay and photo merged into an astonishing portrait: the gibbous Earth, radiantly blue, floating in depthless black space over a barren lunar horizon. A humbling image of how small we are — but even more, a breathtaking image of our lovely, fragile, irreplaceable home. The Earth as a treasure. The Earth as oasis.

When the Apollo 8 commander, Frank Borman, addressed Congress upon his return, he called himself an “unlikely poet, or no poet at all” — and quoted MacLeish to convey the impact of what he had seen. “To see the Earth as it truly is,” said the astronaut, quoting the poet, “small and blue and beautiful in that eternal silence where it floats, is to see ourselves as riders on the Earth together, brothers on that bright loveliness in the eternal cold — brothers who know now that they are truly brothers.”

The message offered hope in a difficult time. Not far away on that same front page was a sobering report that the Christmas truce in Vietnam had been marred by violence. These were the last days of 1968, a divisive and bloody year. We’d lost Martin Luther King Jr. and Bobby Kennedy that year, gone through a tumultuous election, and continued fighting an unpopular and deadly war.