“Senator Sherrod Brown, of Ohio, who is the ranking Democratic member of the Committee on Banking, Housing, and Urban Affairs, said, in an e-mail, that a federal investigation was warranted: “The Trump Organization’s Baku project shows the lack of ‘extreme vetting’ Mr. Trump applied to his own business dealings in corruption-plagued regimes around the globe. . . . Congress—and the Trump Administration itself—has a duty to examine whether the President or his family is exposed to terrorist financing, sanctions, money laundering, and other imprudent associations through their business holdings and connections.

”More than a dozen lawyers with experience in F.C.P.A. prosecution expressed surprise at the Trump Organization’s seemingly lax approach to vetting its foreign partners. But, when I asked a former Trump Organization executive if the Baku deal had seemed unusual, he lau ghed. “No deal there seems unusual, as long as a check is attached,” he said. ”  ♦ 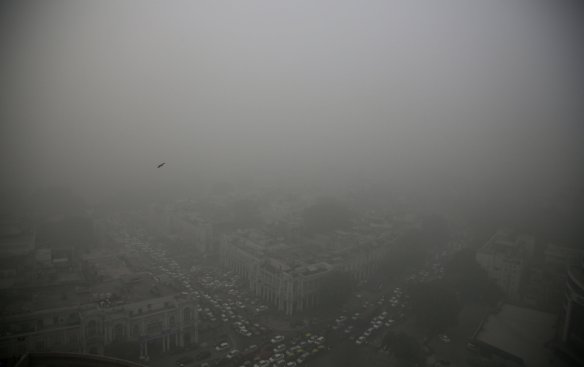 “NEW DELHI — For days, many in Delhi have been living as if under siege, trying to keep the dirty air away from their children and older parents.But it is not easy: Open a window or a door, and the haze enters the room within seconds. Outside, the sky is white, the sun a white circle so pale that you can barely make it out. The smog is acrid, eye-stinging and throat-burning, and so thick that it is being blamed for a 70-vehicle pileup north of the city.

If in past years Delhi’s roughly 20 million residents shrugged off wintertime pollution as fog, over the past week they viewed it as a crisis. Schools have been ordered closed for three days — an unprecedented measure, but not a reassuring one because experts say the concentration of pollutants inside Indian homes is typically not much lower than outside.

Levels of the most dangerous particles, called PM 2.5, reached 700 micrograms per cubic meter on Monday, and over the weekend they soared in some places to 1,000, or more than 16 times the limit India’s government considers safe. The damage from sustained exposure to such high concentrations of PM 2.5 is equivalent to smoking more than two packs of cigarettes a day, experts say.”